It’s been 84 years since the Diocese of Nelson was created from the vast expanse that was the Archdiocese of Vancouver. The Catholic population was small and wide-spread back then, but slowly, slowly it grew in the towns and cities and villages of southeastern British Columbia.  Back in the 1890’s, there were sisters ministering to the people in the future Nelson Diocese.  From the 1890’s to the present day, some 1070 sisters of twenty-seven different religious communities taught, nursed, cared for the children, women and men of this Diocese. That included about 167 Sisters of Charity of Halifax.

The same year that the Diocese was created, 1936, the Sisters of Charity came to both Cranbrook and Kelowna – to staff St. Eugene’s Residential School in Cranbrook, and to begin educational work in Kelowna.  Within a year or two, there were sisters in Kimberley, not far from Cranbrook, and within a few years in Summerland and Nelson.

Known as educators, that was the service asked of them in places where they served, either in school subjects, catechetics, or music. They were also good administrators and served as Directors and Coordinators of Lay Ministry, Faith Formation, Seton House of Prayer, Diocesan Communications, coordinators of parish religious education.They were parish workers, homemakers, Diocesan Archivist, Archival Manager, Executive Assistant to the Bishop. A sister was even the Chancellor of the Diocese for some years.

The names of some of those sisters were better known, and old timers can remember them.  But a lot of the sisters laboured, hidden, for the time they served, whether for a matter of months or for years. Years ago Bishop Emmett Doyle had a hope and a dream that somehow these women of faith would be recognized for the work they did and the sacrifices they made, physical and financial, to bring the faith, nourish the faith, support the faith in this corner of the world.  Though he tried, Bishop Doyle was unable to bring his hope to fruition in his lifetime.

Being a sister, and having worked for him, it was easy for me to appreciate Bishop Doyle’s dream, and working in the Diocesan Archives several bishops later, gave me the means to do the research needed to compile a basic list of the sisters from each community who had served, when, and where, and other key bits of information. The names of 167 of my predecessors in the community were part of the listing. For two years until my “retirement” I was able to pursue that research, and the project continued from home after I left the Catholic Pastoral Centre.

I felt that the research I had amassed in the database had to be verified by the communities themselves, so I wrote to the twenty-seven community archivists, including our own Mary Flynn, and waited for their replies, adjusting the data accordingly. Three more years with the research interrupted periodically by life, and I finally had a list that I felt was at least 98% accurate. (Even as the final printout was made, two corrections were made, and no doubt, there will be a few more as well!)

I laid the data out on pages large enough for reading, planning pages within a frame – some of the 27 communities took five or six frames to list all their sisters who had served. Other communities with fewer sisters shared one frame.  We Halifax Charities had a sizable cluster of frames ourselves! And now those frames line the hall outside of the Diocesan Archives in the Catholic Pastoral Centre, honouring our ancestors in the faith on whose shoulders we stand.

There are today only four sisters serving in the Diocese – two Sisters of Charity (Halifax) and two Congregation of Notre Dame sisters. Some bemoan the loss of the sisters in their church life. They brought a lot to the Christian communities they were part of. But God did not promise immortality to any group in the church of time and space. Nature and the gospel teach us that when something comes to birth, it grows to maturity, then moves toward completion and prepares the way for a new birth. The traditional form of life for sisters as we have known it seems to be reaching completion, and God seems to be preparing the ground for a new form.  Nonetheless, we four who remain, and indeed the whole Christian community, stand on the shoulders of those women whose names appear on the wall of the Archives. 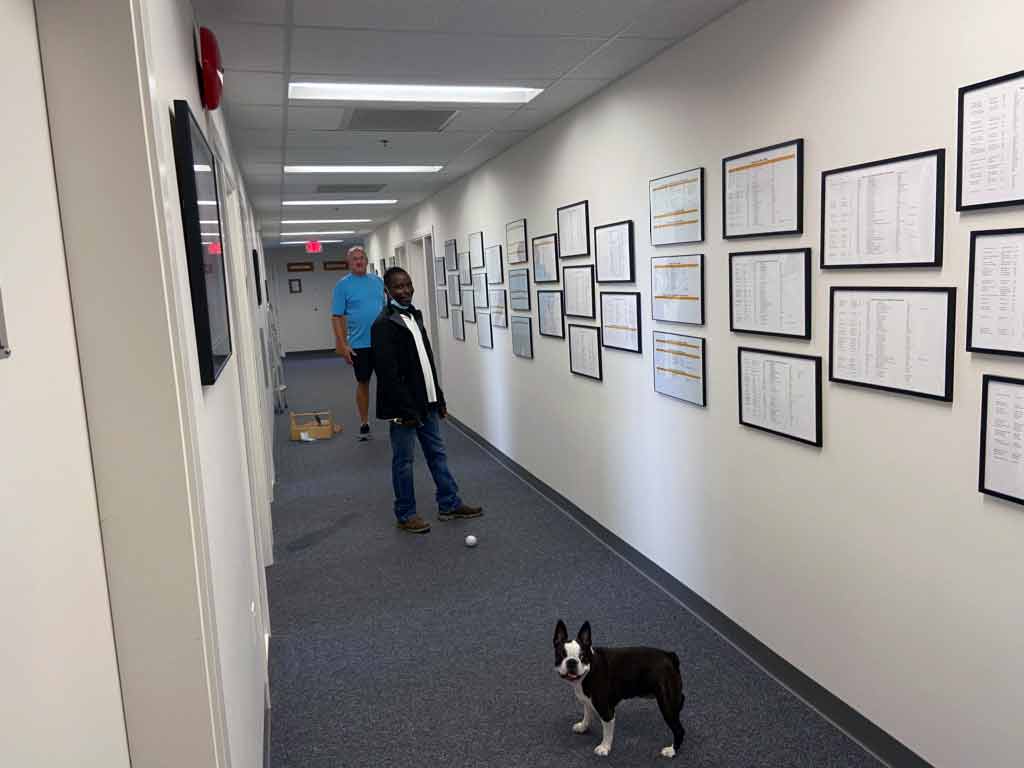 The project and S. Phyllis Giroux