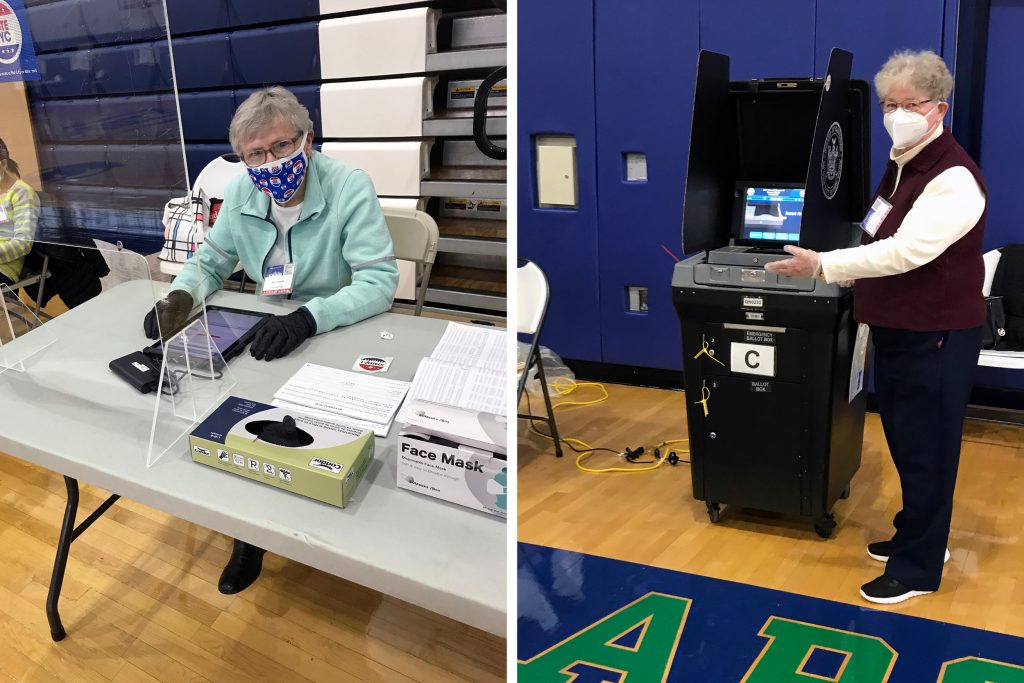 In September of this year, there were many calls for volunteers to work the polls for the US election. Given the turmoil around the upcoming election and in the nation itself, Sister Roberta Kerins and I decided to make our contribution by volunteering to be poll workers. We applied and were accepted. A 3-hour training class was required for all workers. The various tasks of a poll worker were reviewed: opening and setting up the scanning machine or the iPad for voter ID, directing the voter to the proper districts, learning how to handle the poll watchers. As newbies Roberta and I were a little intimidated by what seemed a little complicated. I asked if as new people we would be with an experienced worker. The answer was, “Well, we are a little short of poll workers!!!”

A few weeks later we received our assignments and the poll location. Roberta’s assigned task was being a relief worker, filling in where needed or covering when someone was on break. On the actual day she took on the role of information clerk – helping voters locate their election district. I was assigned the role of scanner inspector – assisting people place their ballots into the scanner to record their votes.

The day began at 5:00 am setting up the scanners, tables, and signage indicating where people were actually to go to vote. Voters lined up and began voting at 6:00 am. There was a steady stream of voters all day. Gratefully, given the COVID-19 threat, the gym was never packed with people. People were quite serious as they approached this task. One woman, 68 years of age, was voting for the first time. There were many young first-time voters. Some came with their parents, others by themselves. One voter said this was a very important election and he had to be part of it. It was very touching to see New Yorkers in a snap shot – old and young, multi-lingual, multi-shaded, cut-offs and hijabs all purposely exercising their civic duty. And many thanked us for our service.

The poll workers themselves represented the area: many young, middle aged and a couple of seniors (us!!). Experienced workers were very helpful to those of us who were new to this. A wonderful spirit of service was present. Roberta and I both felt we had contributed positively to our election process and commented we would do it again.