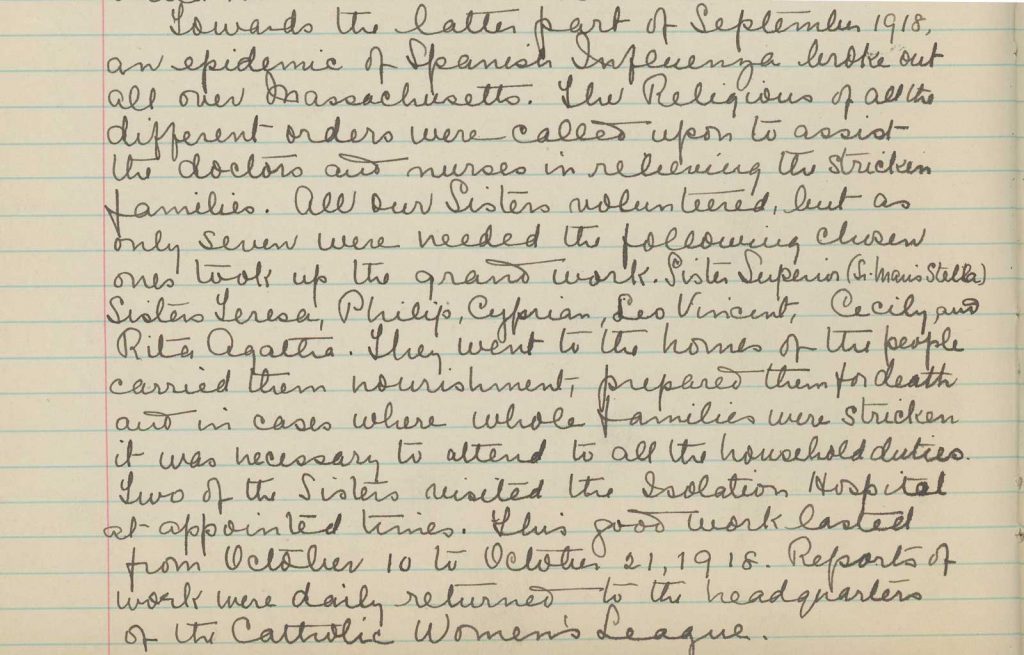 As we finish out the first year of the COVID-19 pandemic, it’s hard not to draw comparisons to the 1918 Spanish Influenza pandemic that similarly affected the world more than 100 years ago. A common thread in the Congregational history and charism is responding to a call to serve those in need. We’ve seen that spirit in the stories of the Sisters caring for cholera patients on McNabs Island and the creation of hospitals, orphanages, nursing homes, and other social services.

In Massachusetts, schools were temporarily closed not long after the start of the 1918 school year. In our archival records, we get a glimpse at how the Sisters responded to the call to join the relief effort by caring for the ill and their families.

In the excerpt from the St. Peter’s Convent, Lowell annals shown above, the annalist writes, “towards the latter part of September 1918, an epidemic of Spanish Influenza broke out all over Massachusetts. The Religious of all the different orders were called upon to assist the doctors and nurses in relieving the stricken families. All our Sisters volunteered, but as only seven were needed, the following chosen ones took up the grand work. Sister Superior, Sisters Teresa, Philip, Cyprian, Leo Vincent, Cecily, and Rita Agatha. They went to the homes of the people, carried them nourishment, prepared them for death, and in cases where whole families were stricken, it was necessary to attend to all the household duties. Two of the Sisters visited the Isolation Hospital at appointed times.”

In nearby Lawrence, the Sisters at St. Patrick’s Convent served their local community: “A hospital, tents on a part of Tower Hill known as Emery Hill, was opened for the benefit of the sufferers … many of our Sisters were there, sometimes six at a time, leaving early in the morning and returning at six each evening. Every precaution was taken to prevent the Sisters from contracting the disease.”

Two pioneer Sisters from the foundation of the Halifax Infirmary, Sisters Mary Gregory Lyons and Mary Austin Higgins, traveled to Massachusetts with two laywomen to staff a temporary hospital in Newton. In Wellesley Hills, some students at the Academy of the Assumption quarantined under the care of the Sisters. Though many of the Sisters and their pupils were infected with influenza in Massachusetts, only one Sister, M. Cecilia Keating of St. Peter’s Convent in Dorchester, died.

Eventually, the flu outbreaks subsided in Massachusetts. The temporary hospitals closed, schools reopened, and Sisters resumed their places at the front of the classroom.