The next three issues of Charity Alive will include short introductions to Associates who are attending Chapter. Meet the first three Associates below! 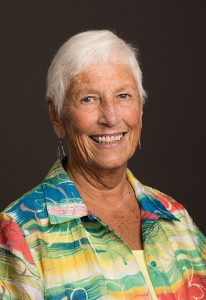 How does one share the tapestry of one’s life, its warp and woof, in a brief article?  You can’t. However, a few facts may suffice.  I, Ronnie Elizabeth Collins, grew up in Dorchester as part of a happy Catholic home of four children.  At that time it was customary for most activities, sports, dances, etc. to revolve around parish life.

After grade six I opted to leave parochial school for Girls Latin. Three years there were a broadening experience that I have always valued. Since the student body was 50 percent Jewish, it opened a whole new world to me and pointed out to me how parochial my previous existence had been. While I enjoyed it there, by grade 10, I felt the urge to return to a Catholic school. As fate would have it, the only opening in a school we could afford was at St. Patrick’s in Roxbury. Enter the Sisters of Charity – Halifax.

From the start they impressed me with their positive spirit, joy and excellent teaching. It wasn’t too long before I felt a call to join them. The fact that they were not diocesan, but Canadian/American had great appeal for me. So, in 1960 six of us from my graduation class took the train from Boston to Halifax to enter the Mount Saint Vincent Motherhouse.  Five years later with a BSc in elementary education, we were ready to be sent wherever needed. I should tell you that all this time I was acutely aware that at some point I was meant to go to Latin America. This conviction had been with me since I was 15 and remained a steadfast reality within me.

I taught a few years back in Boston, had the chance to go to the University of Western Ontario for a degree in nursing and then was sent to nurse in psychiatry at the Infirmary in Halifax, NS. All of these missions I loved. Then I received the phone call offering me the opportunity to serve in Peru. My resignation was offered the next morning and within the month I was at language school in Lima, Peru, preparing to join the Halifax Diocesan team of priests and sisters in Chiclayo.  I would join them in the program of evangelization and the practice of social justice. It was a dream come true.

In time, through prayer and guidance, I realized the reason the Lord wanted me in this part of the world was to meet the man He wished me to marry and raise a family with. It was a difficult decision but, with the love and support of the Sisters with me in Peru and back in Canada, as well as my family, I said yes to the Spirit’s prompting. Don and I both experienced peace-filled affirmation that remained an integral part of our life and love together.  Sadly, he went to the Lord in 2013.

Both Don and I continued to live out our faith in service in a Vincentian way. For 25 years I worked as a VON nurse providing bedside nursing. While I did some staff education, I refused to leave “hands on nursing.” Our mandate included the poor, the rich, whoever was in need. My time in Latin America assured I was comfortable in whatever material situation I found myself. Palliative care gradually became my specialty. It was such a privilege to be with patients and their loved ones when their time on earth was done. I experienced prayer in so many forms during those visits.

In closing, I have to say that 16 years as a Sister of Charity was the greatest gift I could have been given to be a wife, a mother of three, a grandmother of six and a dedicated professional. I continue to be open to finding God in those He sends into my daily life and to celebrate His Goodness in the beauty of His creation around me. 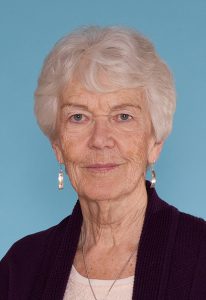 As a child I was always proud to be a “St. Nick’s kid”. And as I was preparing this, I realized how very connected I was to Saint Nicholas of Tolentine School and Parish in Jamaica, NY, and to the Sisters of Charity.  My mom and dad were active in the parish during their dating years and married there. As well Joanie, my younger sister, and I received all our sacraments at Nick’s. We lived in walking distance and came home every day for lunch. We lived behind our dad’s radio repair shop, so he was always home. Too many memories, including my grandmother, so I’ll fast forward. Graduated from Jamaica High and went on to work at Idlewild Airport, now JFK.

I entered the Sisters of Charity in 1959 and served in the Congregation for almost 30 years. I am incredibly grateful to the Community for my education, experiences, and support through the years; especially for the gifts of friendship that have helped sustain my life. That life has included teaching, youth drug work, social work, and administration. My last full-time employment was with a non-profit group that provided community based mental health services.

Sister Rose McNeil “nudged” me toward the Associate relationship. There I have deepened my understanding of how diverse our lives are but always with the glue of our faith, the mission, and the charism of the Sisters.  Associates have been invited to participate in some of the General Chapter. We understand how important a Chapter is in the lives of the Sisters as they discern their future and select leaders. As associates we are exposed with them to opportunities to learn and understand our world, our humanity, ourselves, our Church, and the presence of God everywhere. The writings and spirit of Saint Vincent de Paul are so needed today. We need his keen understanding of the pain of living on the margins and in poverty. Hopefully, we can bring in some ways the heart and sensitivity of Vincent’s instructions to his first daughters, to have reverence for those living in poverty. 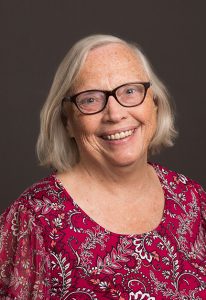 I began life in Colorado where my father served in the Air Force. We soon traveled back to New York where my parents purchased a house on Long Island. I am the oldest of seven siblings and since my parent’s deaths at a young age (54 and 58) I have been the matriarch of the family which now has 15 grandchildren and 16 great-grandchildren!

I became a Registered Nurse when I graduated from high school and then when my own children were in grade school earned my Bachelor’s and Master’s degrees in Education – specifically in Computer Technology.

I taught for 25 years at Holy Child Academy where I met Sister Betsy Groome, a Sister of Charity – Halifax. She invited me to become an Associate in the early 1990’s. At first I drove to meetings in Brooklyn and Staten Island, but then began a Long Island group in my own parish. The parish school was run by our Sisters and I also went to a grade school from 5th – 8th that was run by our Sisters. My seventh-grade teacher, Sister Margaret Bickar taught a shy, introverted girl that she could stand in front of a class and showcase her talents. So, I was certainly inculcated with our charism!

Currently, our group has 12 members including four Sisters and eight Associates and we meet monthly at the church. We have an annual retreat and a picnic in June.

As an Associate, I find I approach most situations in a Vincentian “state of mind”. I volunteer with RotaCare which provides medical care for uninsured people. My job was helping young people become more literate and aware of technology and its uses. I work with my disabled brother in finding resources in the community and state.

I have always found the empowerment and encouragement of the Sisters and other Associates spiritually enriching. The history of the Sisters portrayed the strength of women in community and individually. The gatherings of these women are powerful–the listening and interest in what each person says gives each one of us a forum and place to explore our connections.

Attending Chapter will allow me to be part of the conversation of women I respect and admire. Their spirituality, ministry and excitement of sustaining all of creation makes me a better person.