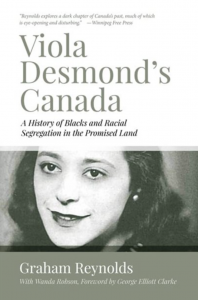 Just last week watching the funeral of John Lewis we saw and heard how a man with purpose and conscience can stir people to action on behalf of justice. This book tells the story of the struggle for racial equality in Canada. The fact that Canada was known as the final stop on the Underground Railroad, led to it being called “the promised land.” This research tells a different story. It includes a history beginning in the 18th century in French and English settlements and concludes with a round circle conducted less than ten years ago with elders sharing memories of racist behavior that began in school settings six decades earlier.

It was only recently that I was introduced to Viola Desmond who is sometimes called Canada’s Rosa Parks (even though her action occurred nine years earlier). This book, which includes not only Viola’s story but the history of racism in Canada, was another view into the centuries of struggle that have brought us to this Black Lives Matter moment across the globe.

Viola owned a beauty parlor and beauty school in Halifax. This successful businesswoman’s act of civil disobedience was to sit in the whites only section of a movie theater in New Glasgow, Nova Scotia in 1946. This landed her in jail overnight and having to pay a fine or remain in custody for 30 days. It wasn’t until 2010 that Viola was granted (posthumously) a free pardon which is an acknowledgement of a miscarriage of justice. Her story was made more widely known through her younger sister Wanda who collaborated with the author. (Wanda took a class at Cape Breton University at age 73 and author Graham Reynolds was her instructor.) Besides the pardon and a stamp, Viola was the first non-royal woman to appear on Canadian currency.

As I read the book I was surprised to learn that black women were not allowed to study nursing in Canada until 1948 and then only after a lot of struggle and activism. I wondered about the role of the hospitals which we (SC’s) were running in relation to supporting and accepting black nursing candidates. Was it an issue?

I know there is a lot I don’t know about this part of our journey to justice. This makes me sure there are lots of questions I’ve never thought to ask. Reading history is a way to start. This book has been described as a “wide-ranging discussion on the broad themes of slavery, race, segregation and historical memory.” (Harvey Whitfield University of Vermont) I recommend it.

*In June the Communications Committee talked about possible topics for future book reviews around Black Lives Matter. See a list of suggested books from the Halifax Public Library.