The Girls with Mary Ceriani on the far right

This is an excerpt from the memorial reading presented at the funeral recently of a dear friend of the Sisters of Charity, held in Wellesley, MA. 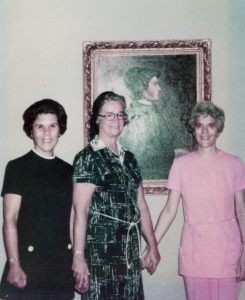 As was mentioned in the beginning of our prayer, Mary’s joy was in helping others in any and every way she was able.  It seems she was born to serve and she did that happily. But the early days of Mary’s life were difficult. Mary was born in Quincy, Massachusetts. She was one of four children. She had an older brother, Charles, and an older sister, Ermelinda who were fraternal twins. Mary’s mother passed away in childbirth, when Mary and her twin sister, Rose were born. For the first few years of her life, one of her aunts helped her father take care of the children and manage the household, but as they grew older, this became difficult for both and the four Ceriani children were placed in the Italian Home for Children in Jamaica Plain, MA where they grew up as orphans. Mary lived there until she aged out of that facility and subsequently, was placed at the Fernald School in Waltham, MA where she lived until her late teens or early 20’s.

As Mary was about to reach the end of the time she could continue to live at Fernald, two Sisters of Charity, Halifax, Sister Marguerita and Sister Marion dePaul, embarked on a mission to provide housing and employment for 15 young women, most of who were referred by the Fernald School, who would otherwise have had no realistic means of providing for themselves. The Sisters acquired the small cottage nestled in lower grounds of the Academy of the Assumption and provided a home for these women. Mary was among them. The Sisters taught the women, who came to be known affectionately as “The Girls”, professional, social and financial skills. All this happened in the late 1950’s and early 1960’s long before anyone took notice of the plight of disadvantaged women in society.

Mary worked as a housekeeper for several families in the Wellesley area for a few years. When Mount Saint Vincent opened as a Formation Center for the Sisters of Charity, that would also house a significant number of retired sisters from the Boston area, it became clear that housekeeping and laundry assistance would be needed. Several of “the girls” were asked if they would be willing to work for the Sisters at this new building. Seven of them did, Mary among them, and the rest, as they say, is history. With a broad smile for everyone she met, Mary washed, waxed and polished floors and did whatever was needed to keep the building sparkling.

When Elizabeth Seton Residence opened in 1980, Mary, along with a few other women went to work there. Residents and their families quickly came to know Mary.  She had a remarkable ability to do her work while graciously engaging with the residents in a way that made each one feel special. Mary had the memory of an elephant—she never forgot a name—not only the names of all the residents in the various modules but names of their family members as well and many of them have remembered Mary after many years.

Nothing was too much for Mary. In her later years, after she “officially” retired, she continued to find multiple ways to continue to be of service in many little ways whether it was saving a bagel or getting a muffin for one of the Sisters who didn’t prefer to go down to the dining room for breakfast. And not just any muffin or bagel or donut, but the biggest muffin and only the specific kind of bagel or donut that the Sister liked. She polished up community pins so they could be used for our Sisters’ funerals—they had to be perfect and shiny. She knew how various Sisters liked their coffee or tea and took delight in bringing it to their tables. On the first Saturday of each month, she assisted the ladies of the À Kempis Circle as they gathered in the dining room for dinner. Mary walked countless steps through the buildings delivering Sister Esther’s notes and cards from the Care Team.  Putting up notices for Sister Ann Regan and Sister Pat Kelly was her speciality. She was attentive to the slightest need and the smallest detail.

The only song Mary wanted at her funeral was “Jesus, Remember Me”.  It is reflective of her meek heart. Mary was loving, gracious, kind, caring, gentle, generous, dependable and always thankful for the smallest kindness shown to her.  We here at Mount Saint Vincent owe a great debt of gratitude for the life of service she lived among us. She has a special place in the hearts of all of us—Sisters, staff and residents alike.  In her own way, Mary gave “joyful witness to love” during her 65 years with us. We rejoice that she now joins the family she never really came to know in this life and we trust that she rests in the peaceful embrace of the God she loved and that she is enjoying the fruits of her life-long labors.