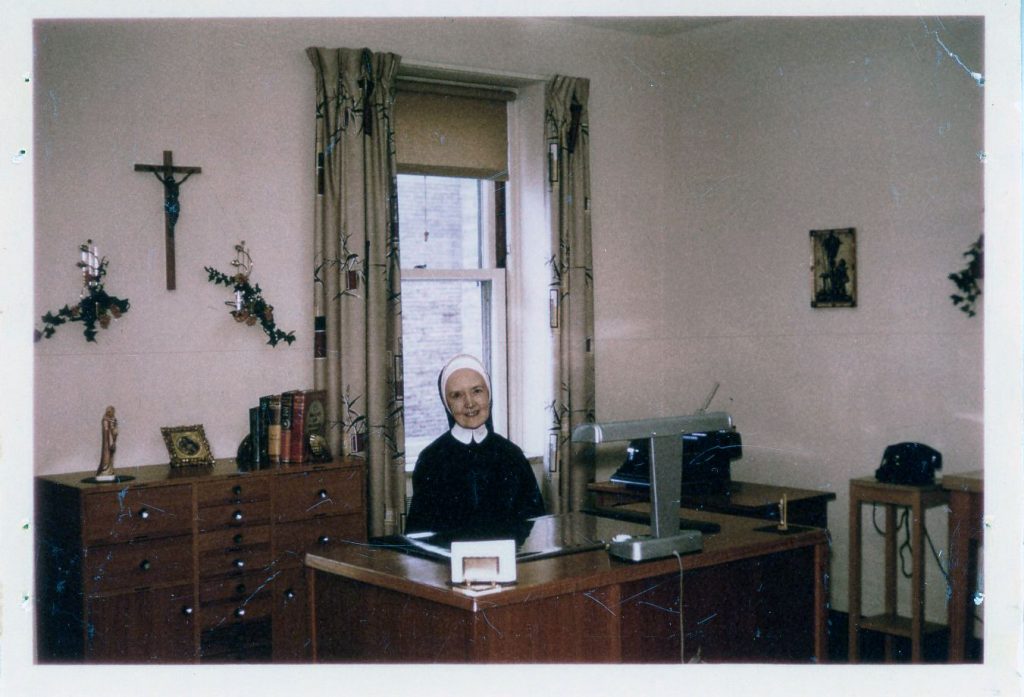 In preparing the archives column for this issue of Charity Alive’s theme of inspiring Sisters, I started by searching in our records for Sisters who have been recognized with awards. My research became unwieldy with all of the Sisters who received long service awards, medals, honours, recognition for their work. As I tried to decide which Sister to recognize, my mind started to drift to those that have personally inspired me in my work as archivist. I thought of Sister Mary Emmanuel Sullivan, whose decades of work have laid a valuable foundation for Sisters of Charity – Halifax Congregational Archives.

Born in Roxbury, Massachusetts on June 17, 1899, Gertrude Frances Sullivan was a kindergarten teacher before entering the Congregation in 1924. She taught for a few years before transitioning into a role as private secretary for Mother Mary Louise Meahan. Following the Motherhouse fire in 1951, Sister Mary Emmanuel was transferred to St. Stephen’s Convent, where she served as a secretary to the administration. Sister Inviolata Kline, Vicar General and Secretary General, immediately began to replace the records of the living Sisters, but no attempt had been made to reconstruct the necrologies, community register, cemetery register, and biographical records of the 517 Sisters who died before the fire. Sister Mary Emmanuel was assigned this project in 1963 and her meticulous work resulted in the most valuable and historically important records in our modern archives.

Sister Mary Emmanuel later wrote, “that task has required years of illimitable, painstaking research in every possible area; voluminous correspondence with Clergy and Laity in many parts of the world.” In a time before Ancestry and other online genealogical resources, it’s no small feat to track down hundreds of birth and baptismal certificates, family information, and obituaries.

In addition to her reconstruction work, Sister Mary Emmanuel also handled research requests, set up the Archives Museum in the new Motherhouse, catalogued artifacts, developed the archives holdings, and tended to three Boston ferns, among other responsibilities. Near the end of her time as curator-archivist, Sister Mary Emmanuel was asked what in her work interests her the most and she responded, “Every bit of it, Sister! It is ALL the will of God for me, and … I love it ALL.”

After resigning from her role in 1979, Sister Mary Emmanuel retired to the Queen of Peace Community in Mount Saint Vincent Motherhouse, where she resided until her death in 1989. Sister’s obituary reads, “she was meticulous in whatever she did, feeling that all things were to be done for the love of God and therefore with great care. Her constant intent was to do the will of God in all things and to do it as well as possible.” Every day, I am thankful for the hard work that the Sister and lay women archivists have put into the archives and preserving and sharing the history and charism of the Congregation.