One of the most frequently asked questions from researchers is “where is this Sister buried?” I like these types of requests; not only are they fairly straightforward to answer, which can be rare in the archives world, but it’s also nice to hear that Sisters are being remembered and honoured by their former students, relatives, and other loved ones. 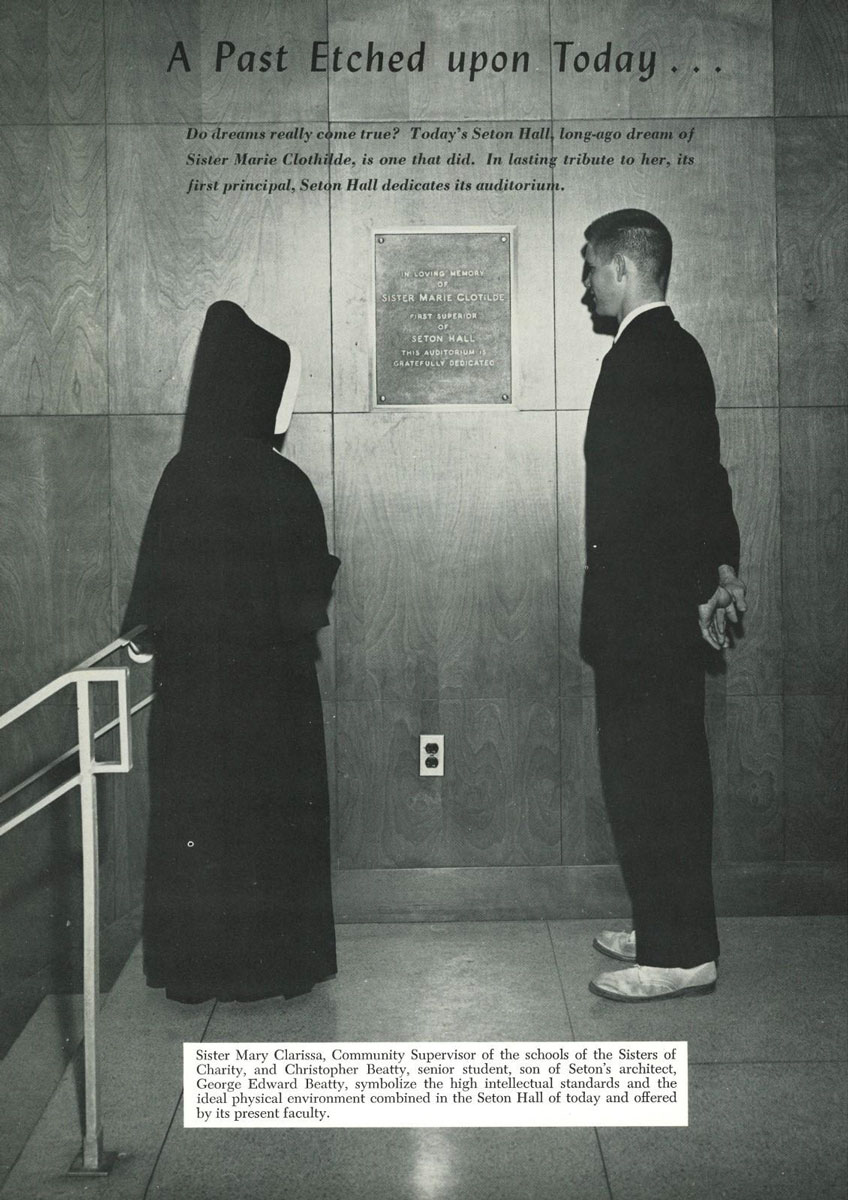 There are numerous examples of missions, buildings, and awards being named after Saints Elizabeth Seton and Vincent de Paul, but I wanted to explore a few ways in which individual Sisters of Charity have been honoured over the years.

Another Seton Hall teacher, Sister Margaret (Therese Carmel) Flahiff, came to mind. Sister Margaret had a long career as a history teacher, professor, principal, librarian, and sodality director in the United States and Canada. After her term in office as Secretary General for the congregation ended in 1972, Sister Margaret assumed the role of the first Head Librarian at the Atlantic School of Theology (AST) in Halifax. After six years in that position, she continued on a part-time basis as Serials Librarian while also serving as the Congregational Archivist and Historian. In 1988, she was honoured by AST with a Doctor of Divinity degree and on June 27, 1994, four years after her death, a room in the new AST library overlooking the Northwest Arm was christened the “Sister Margaret Flahiff Room.” 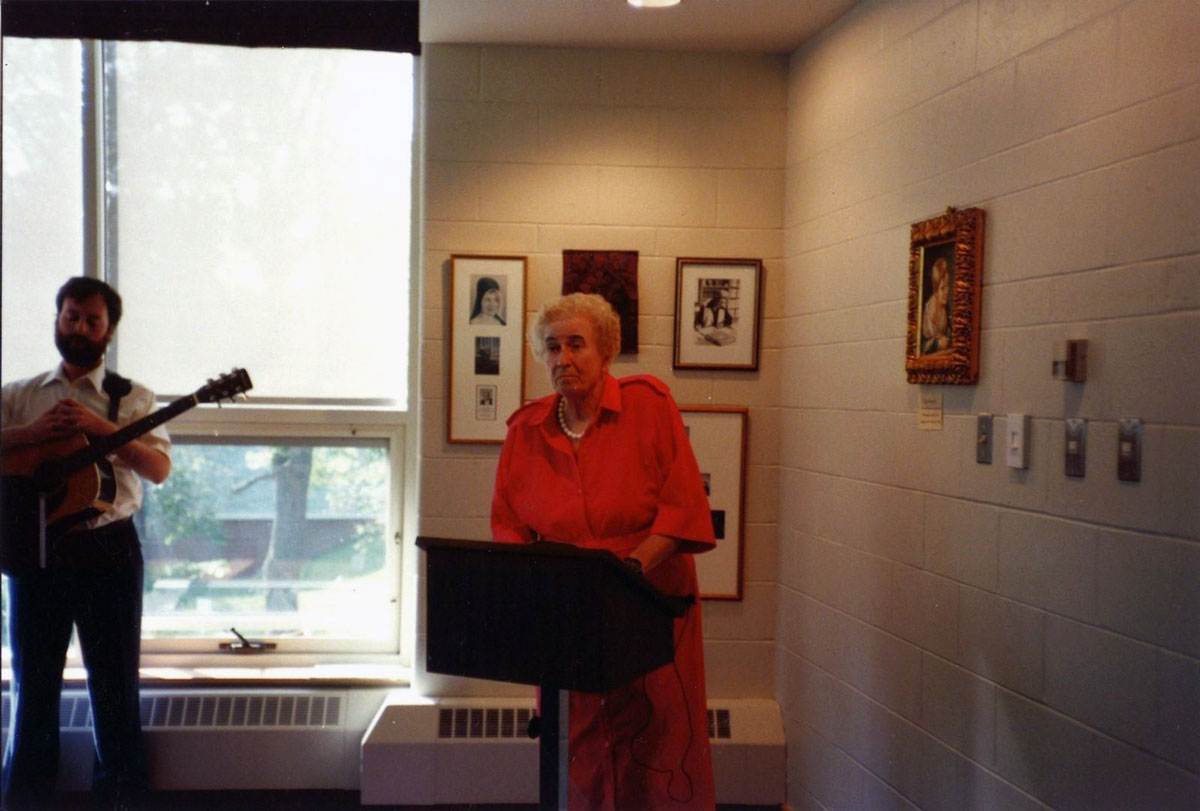 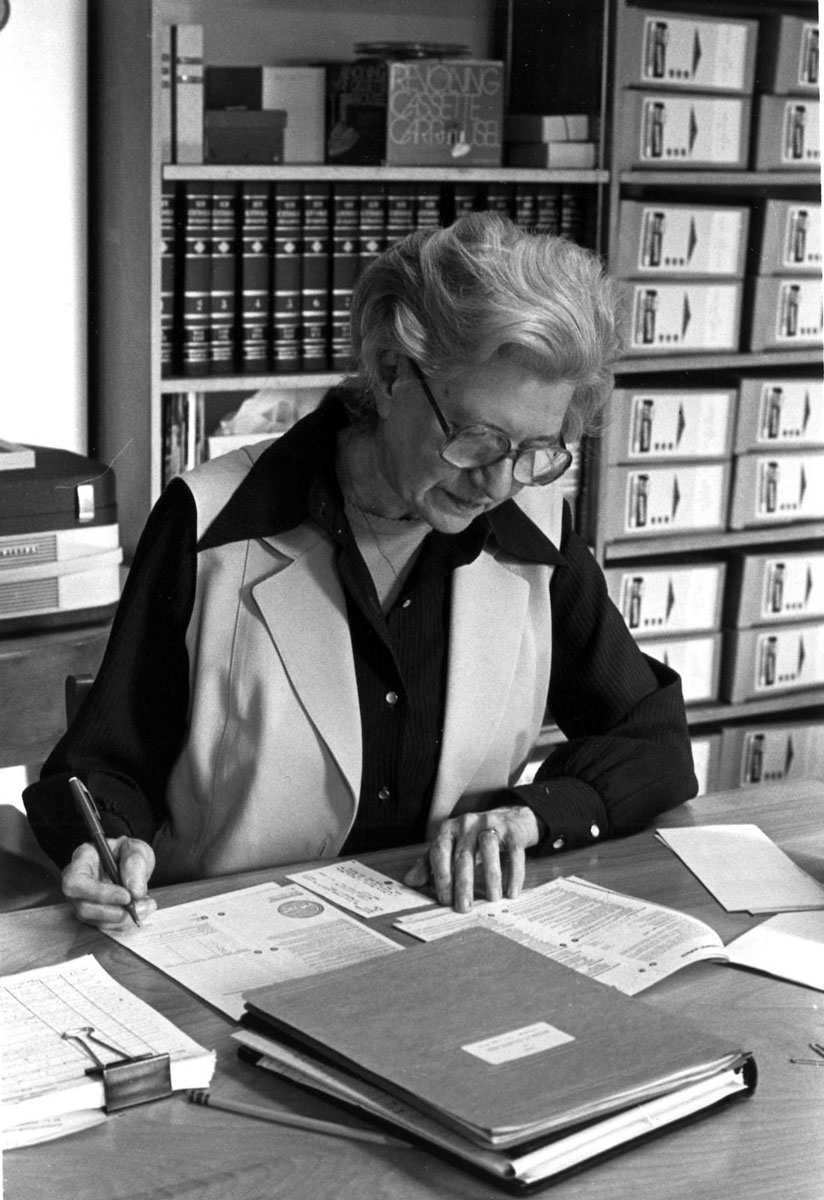 SCHalifax Archives #1390 S. Margaret Flahiff, archivist at MSV Motherhouse, 1980. This photograph of Sister Margaret can be seen hanging on the wall behind Sister Helene Darte at the room dedication.

Did you know that there was a school in Halifax named after a teaching Sister? Sister Mary Pius Devine was a born and raised Haligonian who joined the community in 1875. From 1885 until 1909, she taught at Dutch Village School, renamed to Maryvale (sometimes spelled Maryville) School in 1900. In 1909, the students from Maryvale were sent to the newly constructed Oxford School and Sister Mary Pius served as principal until she retired in 1927 to Mount Saint Vincent Motherhouse.

After five years of retirement, Sister Mary Pius died in 1933 and 13 years later, she was honoured as the namesake of the new Sister Pius Memorial School. The new school was housed in three rooms in the basement of St. John the Baptist Church in Melville Cove and the Sisters taught grades 1, 2, and 3. Over the years, the school expanded and a six room school building was constructed to house the growing student body. In July 1969, Sister Pius Memorial School, along with St. Pius X School, was taken over by the Halifax School Board and in 1972, the school was closed due to declining enrollment. 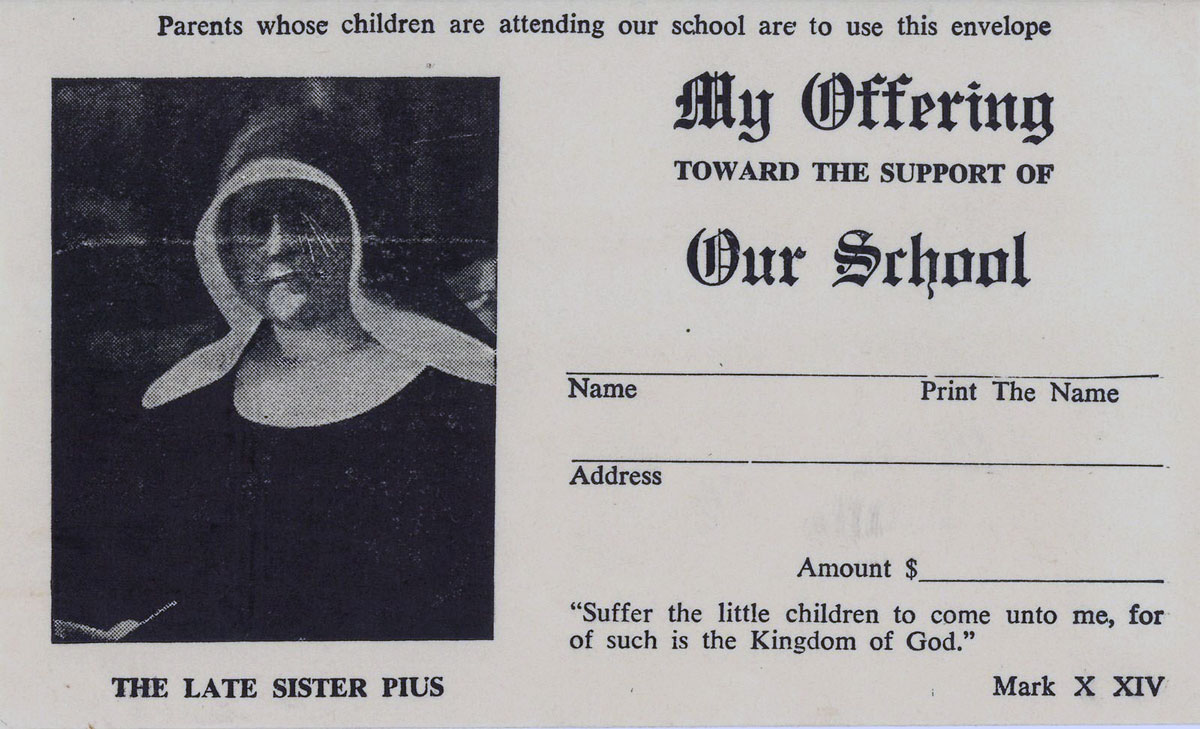 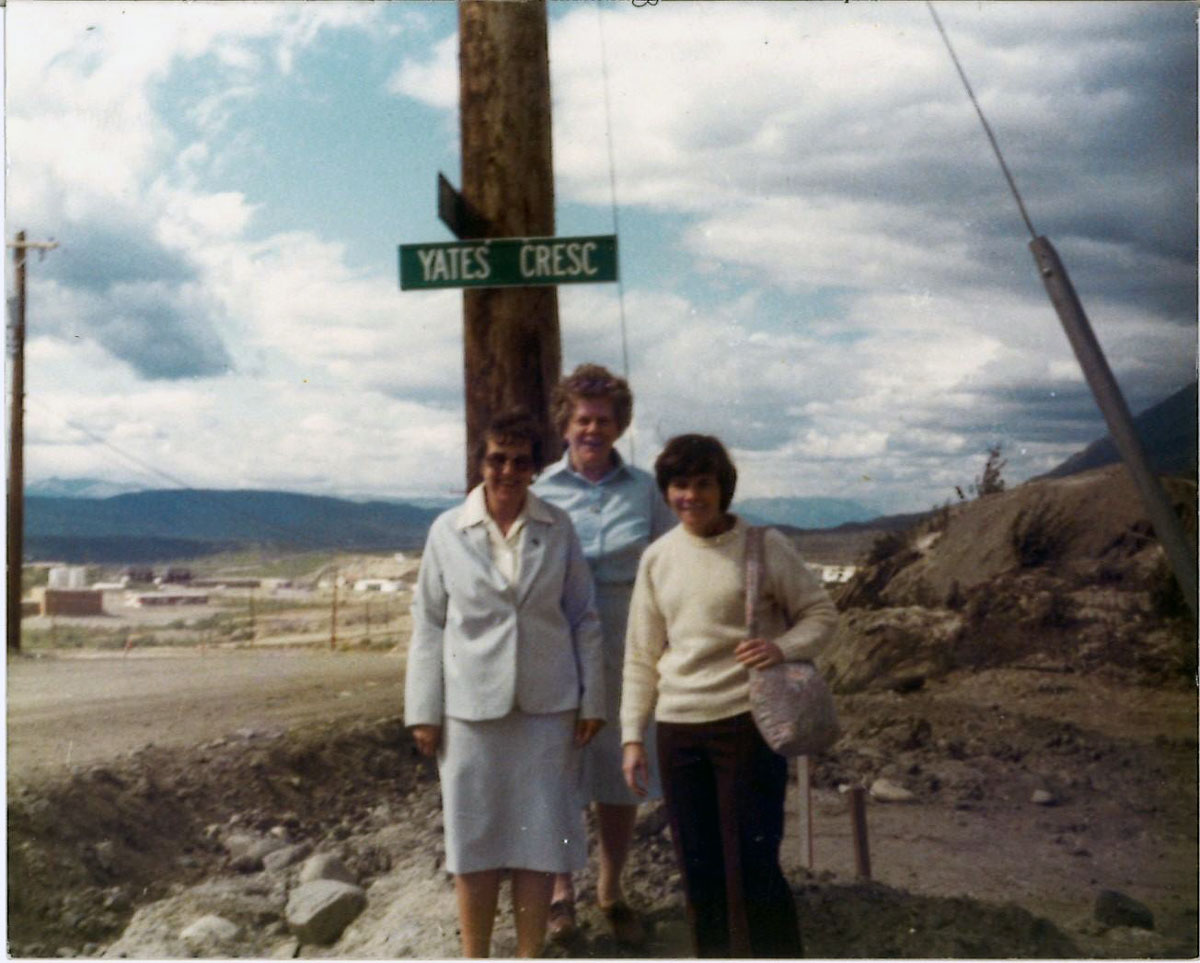 In 1980, the town of Faro selected her name for a road in a new subdivision: Yates Crescent. The town council honoured Sister Francis Elizabeth for her “exemplary contributions, participation and the high esteem” she achieved in the community. 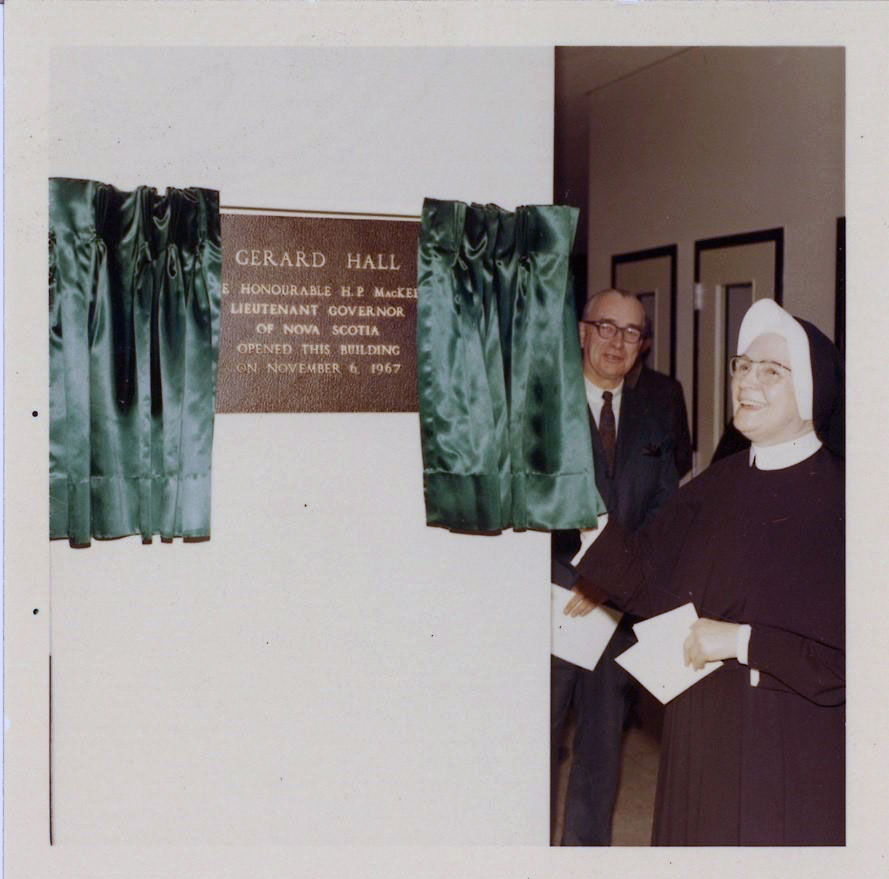 Sister Catherine Gerard Herlihy entered the postulate on February 1, 1916, and made her final vows on August 15, 1924. Sister Catherine Gerard dedicated her life to healthcare ministries, beginning with her training as a nurse and ministries at Mount Saint Vincent Motherhouse and Hamilton Memorial. In 1928, she became the case room supervisor at the Coburg Road “Baby Home,” a maternity hospital branch of the Halifax Infirmary. She served in supervisory roles at the Halifax Infirmary until becoming director of nurses in 1941, then finally served as administrator of the Infirmary from 1948-1965. When the Queen Street location of the Halifax Infirmary expanded, Sister Catherine Gerard was recognized for her years of dedication to the hospital and its school of nursing. Gerard Hall has served as a dorm for Dalhousie University students since 2003.