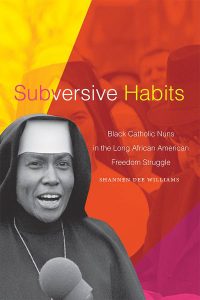 “Subversive Habits” is a clever title, but the subtitle that scholar Shannen Dee Williams chooses for her superb book states her theme much more cogently: ‘Black Catholic Nuns in the Long African American Freedom Struggle.” Through exhaustive research and copious footnotes, Williams makes it clear the story she wants to tell is not only about African American nuns, not only about these nuns’ civil engagement in the cause of desegregation. Rather, she is at pains to situate Black sisters’ heroic deeds within the context of American history, and in particular, the role of the Catholic Church in that history. This complexity, as experienced by individual African American sisters and Black Religious congregations, is fascinating, painful and challenging.  Williams is fierce in her quest to accomplish her goal. She is a truth-teller. She does not mince words. And yet, she includes reconciliation in her quest, and is herself instrumental in an astonishing act of reconciliation as the book closes.

Williams begins by rejecting the idea that discrimination in the Catholic Church and religious life was simply a reflection of the surrounding society. She reminds us that the Catholic Church was actively involved in promoting slavery from the earliest days of the European conquest of the Americas. Popes and Bishops provided justification for the institution of slavery in their official pronouncements.

The “revolutionary development” of Black Catholic Sisterhood in the U.S. is traced to the flight of newly freed enslaved people from San Domingue, (present-day Haiti) to regions of the southern U.S. after their slave-led revolution in the late 1700’s. Seeking to serve a newly arrived group of Black Catholics through education, Black sisterhoods formed independently and began the arduous task of setting up schools and other social service ministries. The struggle of the sisters for legitimacy was constant. Yet, these pioneering women never gave up.

Throughout the nineteenth and early twentieth century as communities of White Sisters were formed and began to mature, Black women and girls sought to join them and express their desire to live out a vowed commitment. Often, they were rejected outright. Others, who were admitted into white congregation were discriminated against in every aspect of their life: final profession postponed, higher studied denied, non-professional work assigned on the basis of their race.  The members of Black religious congregations—some of which survive to this day—directly faced discrimination and disempowerment of the Catholic hierarchy and Catholic laity. Williams describes in detail a “Catch 22” faced by Black sisters when the demand for educational credentials in order to teach became fixed policy. Sisters were not allowed to go to Black public universities because they were not Catholic. And the same women were barred from Catholic Universities because of the color of their skin. Eventually, a few Black sisters were permitted to study in certain Catholic Universities “through the back door” via private arrangements that skipped standard registration. Little by little, Black sisters opened their own normal schools, to provide training to their members.

Williams devotes two chapters to the civil rights era, and the participation of Black sisters in marches, protests and desegregation of schools, hospitals and social service agencies. She describes the bias Black sisters faced when Diocesan policy decisions were made about school closings in the wake of declining numbers after Vatican II. And she paints an extraordinary picture of the formation of the Black Sisters Conference in 1968. The courage and sheer giftedness of the founding members is beautifully described.

Throughout, Williams names names. Pain and injustice suffered by Black sisters do not appear as generalized concepts, but as documented tales with names, dates, and places. Almost 30% of this 394-page tome is devoted to footnotes, bibliography and index. Our beloved Elizabeth Seton is one of the names that Williams mentions. The possibility that the Emmitsburg sisters supervised enslaved persons, and that Mother Seton accepted slave labor as tuition in her school is raised as a distinct possibility.

“Subversive Habits” is an important book for religious women, Catholics and Americans.  Williams–scholar, truth teller, Black Catholic woman– does not let us off the hook, but rather illustrates that taking responsibility for our past can result in reconciliation, freeing us to move to a more just future.