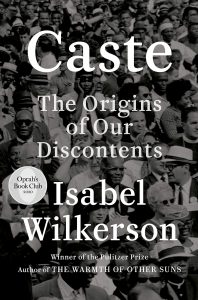 My friend, whose son-in-law was brought up in India’s caste system, said she understands him better after reading the book. I myself learned that I had been unaware of much in our documented history, e.g. I was astounded to read that when Hitler was devising methods to punish and devalue Jews, he was advised to follow our country’s ways of treating Blacks.

I have heard people nowadays wondering why Black people are still complaining about what happened to their ancestors 400 years ago. Wilkerson shows, in one example after another, how racism is still very much alive. The author was doing research for a piece she was writing for the “New York Times” about a new retailer in Chicago’s “Magnificent Mile.” When she arrived for the pre-arranged interview, the retailer wouldn’t believe that the Black woman in front of him could possibly be the Pulitzer Prize winning “New York Times” journalist he had been expecting, even after he had insisted on checking her business card, so the interview never took place.

I think the book has made me more compassionate and understanding of others and has opened my eyes to racist tendencies of which I was unaware in myself and in our country.