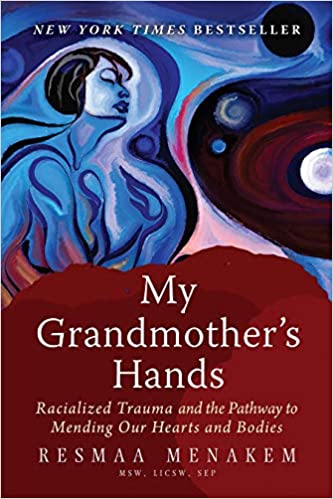 Resmaa Menakem’s grandmother’s hands, unusually stubby and padded, were instruments of healing and comfort for her young grandson. Why were they so strangely shaped the child asks? The answer comes: they were callused and thickened from picking cotton from the age of four. So begins Menakem’s book, with a bodily image, a memory of childhood, and the framework of black experience—elements that will be plumbed throughout his text. Clearly written, compassionate, and challenging, My Grandmother’s Hands is neither memoir nor self-help book. Rather, it is a workbook. “Don’t read any further,” he admonishes early on as he presents exercises meant to bring readers in touch with their body. More specifically, his goal is to offer readers access to their “soul nerve,” a bodily structure that connects one to “the part of the brain that doesn’t use cognition or reasoning as its primary tool for navigating the world.”

As context for the exercises, we are quickly introduced to black bodies, white bodies and blue [police] bodies. No matter which group one identifies with, all bodies have suffered trauma, either directly, or through genetic and historical connections to violence. Often times direct experience of trauma compounds a genetic connection. Readers who have white bodies may be surprised to discover the historical reference to white body trauma. What factors resulted in so-called civilized white people enslaving others, slaughtering indigenous peoples with virtually no recognition that these acts were wrong? Menakem locates this appalling lack of awareness in the long history of European society, where torture and horrific methods of capital punishment were the norm. If white bodies are to heal and awaken to the grievous suffering of black bodies, they must admit their own trauma and accept its direct connection to white privilege. Over the centuries, violence was passed on through the construction of “The Great Othering.” Black bodies are “Others” to be feared and controlled. Since the black body can never blend into the dominant group—composed of white bodies—they are victimized by successive social and economic structures. The reader is helped to see a straight line from enslavement to the appalling inequality unmasking by the pandemic.

Menakem combines his analysis with specific exercises to help white and black bodies begin to heal from trauma. He insists that healing necessarily depends on learning to understand one’s “soul nerve,” the unique responses one’s own body makes to danger, depending on the experience one has absorbed even from the womb. Each body has also absorbed elements of the history and culture it inhabits. He offers different exercises for white and black bodies, emphasizing that there really is a significant divide between what the two groups’ experience. The exercises are time-consuming, between 10 to 30 minutes. The hope is that the reader will also agree to be a subject, identifying as one in need of healing, willing to commit to a process of change.

The book closes on a high note. “Healing from white-body supremacy begins with the body—your body. But it does not end there. In order to heal the collective body that is America, we also need social activism that is body centred. … We need collective action—action that heals.” It has never been more obvious how high the stakes.