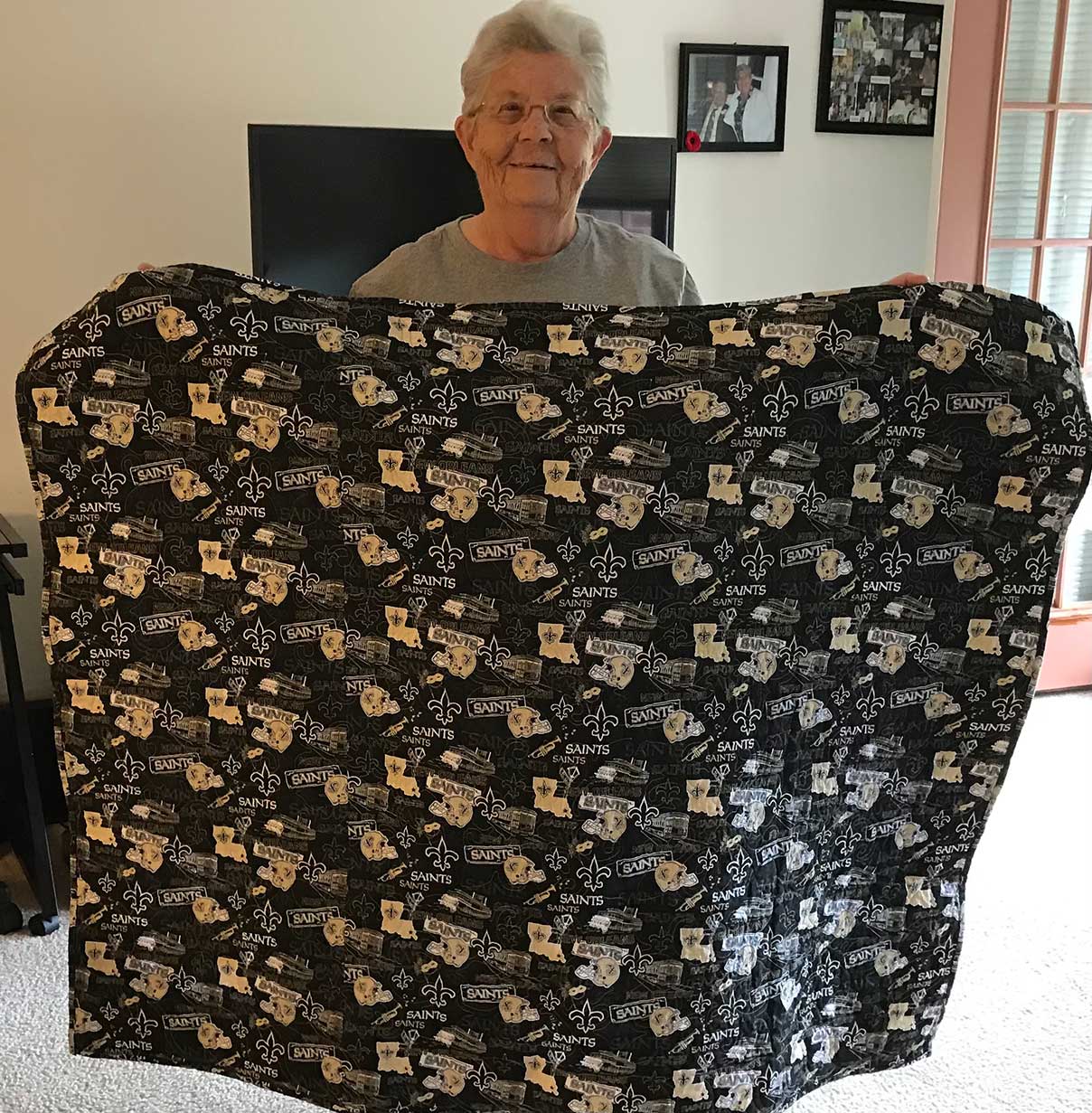 On May 2, 2021, I decided to go on vacation at the House of Charity in NOLA – that’s New Orleans, Louisiana to the uninitiated.  I felt like I needed a break after 2020.  At the beginning of my vacation, we had lots of sunshine with temps in the eighties. We went here, there, and everywhere, enjoying many laughs along the way.  More enjoyment followed when we Charities, from five different congregations, sat down to work the crossword in the newspaper, share meals and tell stories. Gathered at different times were Vivien Linkhauer, Sisters of Charity Seton Hill; Monica Gundler, Sisters of Charity Cincinnati; Patty Huffman, Daughters of Charity, Province of St. Louise; Theresa Kramer, Sisters of Charity – Halifax; and Peg Johnson, Sisters of Charity Leavenworth,  Leavenworth, KS.

However, it did not stay all sunshine during my stay. We got some rather nasty weather – enough so that it kept us indoors. One of those bad weather days Peg said, “Theresa, I’m going to teach you how to make a quilt.”

Peg, being a type “A” as well as a quilt maker, had a challenge on her hands. I knew that I could swing a hammer or a paintbrush, but sewing a quilt?!! Sewing is not one of my talents. But I said, “Sure, let’s give it a try.”

Peg began her lesson by introducing me to a cutting board and a rotary cutter and demonstrated how to measure correctly and cut the fabric precisely.  We proceeded, not without some trepidation.  Those rotary cutters have sharp blades! And the needle on the sewing machine looked like it could stitch my finger as well as the fabric pieces. I prayed to St. Joseph for better weather in order to escape back outside but for some reason, the rain did not abate. Peg assured me we had access to a plentiful supply of Band-Aids and did not let me off the hook.

The arranging of the quilt blocks came after all the squares were cut and sewn. The pieced blocks were 10 inches. The solid blocks were also 10 inches.  The idea was to arrange them into a pleasing format. Peg had gold and black squares to mix with the pieced gold and white ones.  She would lay them out one way and then another and then asked my opinion. “Well,” I said, without a moment’s hesitation, “this is a Saints quilt, black, and gold.”  (You don’t spend time in NOLA without coming to appreciate their football team). With that revelation, the placement became clear. Under Peg’s watchful eyes, the squares and blocks were laid out.  Next came pinning them into rows prior to the sewing. I thought this was the easiest part until experience taught me that pinpricks can draw blood!

When the pinning was completed, we started with the actual sewing of all of it together to make the front side of a quilt. I started sewing a row and got nervous that I would mess up since I haven’t used a sewing machine since having real lessons in grade five. Peg did say there is a tool to be used if that happened – a ripper!  Didn’t sound appealing to me, so I asked my collaborator, Peg, to take over and do all the sewing of the patches together.

The choice of the outside border and backing came next. I had an idea for that!!  We caught a break in the weather and ventured out to JoAnn Fabrics where I found the perfect material depicting the Saints and the spirit of New Orleans. Then it was back to the house to measure, cut, and sew the borders.  Peg then mailed the quilt top and backing to a seamstress in Weston, MO, who would insert the stuffing, called batting, and quilt it. The quilter used a fleur-de-lis pattern for the stitching.

By the middle of June, the “collaborated quilt” arrived at its permanent home in Needham. Naturally, I felt proud of what I did, mostly with Peg’s help. I took many photos of the finished quilt to show my family and friends.  My nephew’s response to the pic was, “Now I’ll send you NE Patriots material.” My answer was “No, don’t.”  It was a one and done, but with lots of fun. The quilt is simply gorgeous and I love it. 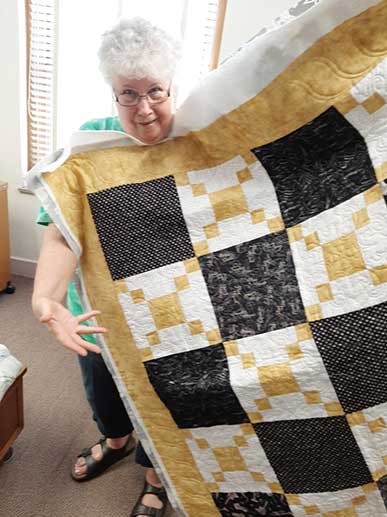 I knew I could swing a hammer or a paint brush, but sewing a quilt?!

Book Review – Think Again: the Power of Knowing What You Don’t Know