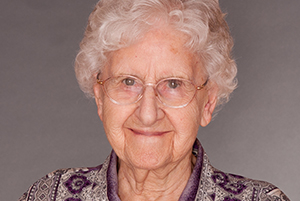 Norris, Sister Helen (Sister Helen Elizabeth), 94, died at Caritas Residence in Halifax, NS on October 17, 2018.  Born in Halifax, on October 2, 1924, she was a daughter of James and Elizabeth (Deveau) Norris.  Sister Helen entered the Sisters of Charity–Halifax on February 2, 1950 and made her profession on August 15, 1952.  For twelve years, Sister Helen taught in Dorchester, Wellesley Hills and Roxbury, Massachusetts.  In 1964 Sister returned to Canada and worked in the Admitting Office of St. Elizabeth Hospital, North Sydney.  In 1966 she was assigned to the Motherhouse where she worked in the Business Office until her retirement in 1994.  She then volunteered in various activities with the Sisters at the Motherhouse until she moved to Caritas Residence in 2008.  Sister is survived by a sister, Kathleen Norris, as well as several nieces and nephews. She was predeceased by her parents and brothers, James, Leo and Fred and sisters: Sister Jean SC, Gertrude and Cecelia Foran and Sister Thomas Edward Foran SC.  Visitation will be at Caritas Residence on Monday, October 22, with visitation from 3pm until the Prayer Service at 7pm.  A Mass of Christian Burial will be celebrated on Tuesday, October 23, at 10 am in the Immaculate Conception Chapel in Caritas Residence.  Burial will follow in Gate of Heaven Cemetery, Lower Sackville, N.S. In lieu of flowers, donations may be made to the Sisters of Charity Ministry Fund.