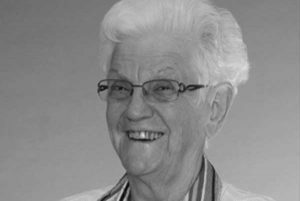 Pottie, Sister Anna (Mary Josita), 81, of Halifax, died suddenly in Caritas Residence, Halifax, N.S. on January 20, 2018.  Born in Halifax, on June 3, 1936, she was a daughter of Maxime Leo and Denathilde (Chiasson).  Sister Anna entered the Sisters of Charity – Halifax on October 1954 and made her first profession on April 1957.   Sister served the congregation in a variety of services, principally as a nursing assistant and later as a hairdresser for seniors in Halifax. Sister Anna was the Home Supervisor for Gillis House in Boisdale, NS for 6 years. For many years she was a volunteer visitor to seniors.  Sister Anna is survived by a sister, Marie Walsh and brothers: Thomas, Father Charles S.J. and Wayne.  She is predeceased by a sister Shirley, and brothers Wilfred, Joseph and Father Kenneth. A funeral liturgy will be celebrated on Thursday, January 25th, in the Immaculate Conception Chapel at Caritas Residence.  At 9:30am there will the Welcoming of the Body followed by Mass.  Cremation will follow.  In lieu of flowers, donations may be made to the Sisters of Charity Ministry Fund.  The Mass of Christian Burial, for Sister Anna will be held at Saint Mary’s Basilica on Saturday, January 27th at 10am followed by burial at Mount Olivet Cemetery, Halifax.