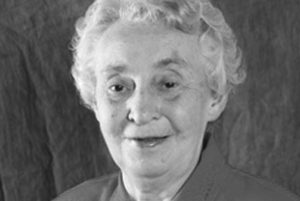 Thibodeau,  Sister Mary Veronica (Mary Theresa), 90, died in Parkstone Enhanced Care, Halifax, NS on June 20, 2017.  Born in Bathurst, NB on March 17, 1927, she was a daughter of Walter and Leontine (Chaisson) Thibodeau.  She entered the Sisters of Charity- Halifax in 1946 and made her perpetual profession on August 15, 1955.   Sister Veronica served 41 years in religious life, spending the greater part caring for the aged and performing various duties at the Motherhouse in Halifax, Stella Maris in North Sydney, St. Brigid’s home in Quebec and Sacred Heart Convent in Meteghan.   She is survived by a sister, Veronica Boucher, and brother, Wilfred, as well as several nieces and nephews.   Sister Veronica was predeceased by her parents and by sisters: Marjorie, Irene (Chamberlain), Irene (infancy) and brothers: Walter and Claude. The body will be in Caritas Residence on Sunday, June 25, 2017, with visitation from 3pm until the Prayer Service at 7pm.  A Mass of Christian Burial will be celebrated on Monday, June 26, in the Immaculate Conception Chapel in Caritas Residence.  Burial will follow in the Gate of Heaven Cemetery, Lower Sackville.  In lieu of flowers, donations may be made to the Sisters of Charity Ministry Fund.