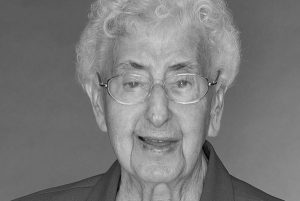 Norris, Sister Jean (Sister James Elizabeth), 90, died in Caritas Residence in Halifax, NS on October 20, 2017.  Born in Halifax, on April 2, 1927, she was a daughter of James and Elizabeth (Deveau) Norris.  Sister Jean entered the Sisters of Charity – Halifax on February 2, 1948 and made her perpetual profession on August 15, 1950.  For eight years, Sister Jean did congregational services in Quebec City and in Halifax.  In 1958, Sister Jean began her teaching career at various locations in New York until her retirement in 1991 when she moved back to Halifax and did volunteer work at Mount Saint Vincent Motherhouse. Sister moved into the retirement Centre at MSVM in 1992 and subsequently moved to Caritas Residence when it opened in 2008.  Sister is survived by two sisters, Helen, SC and Kathleen Norris and one brother, Fred Norris, as well as many nieces and nephews.  She was predeceased by her parents and brothers, James and Leo Norris and sisters, Gertrude and Cecelia Foran and Sister Thomas Edward Foran SC. The body will be in Caritas Residence on Wednesday, October 25, with visitation from 3 pm until the Prayer Service at 7 pm.  A Mass of Christian Burial will be celebrated on Thursday, October 26, at 10 am in the Immaculate Conception Chapel in Caritas Residence.  Burial will follow in Gate of Heaven Cemetery, Lower Sackville, NS.  In lieu of flowers, donations may be made to the Sisters of Charity Ministry Fund.