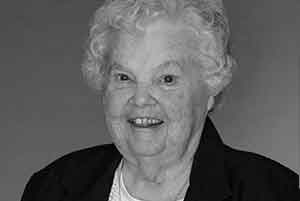 Boyen, Sister Elaine Therese, 86, died December 16, 2017 in the QEII Infirmary Site. She was the daughter of John and Teresa (Rodman) Boyen. She entered the Sisters of Charity in 1949, with first profession in 1952 and final profession in 1958. Sister taught mainly Grade One for thirty years in Halifax. N.S., Brooklyn, Williston Park, Wantaugh and Jamaica, N.Y. as well as Riverton N.J.  After retiring from teaching she worked in pastoral ministries in N.J.  In 1984 she returned to Halifax to work with the senior Sisters at Mount Saint Vincent Motherhouse.  During this time she was actively involved with the Charismatic Movement.  She officially retired in 2001 due to illness.  She was predeceased by herparents. She is survived by cousins, Susan Quinzel, VA. and Kathleen Hartman, N.Y.  The body will be in Caritas Residence on Tuesday, December 19, with visitation from 3pm until the Vigil Prayer Service at 7pm.  A Mass of Christian Burial will be celebrated on Wednesday, December 20, at 10am in the Immaculate Conception Chapel in Caritas Residence.  Burial will follow at Gate of Heaven Cemetery, Lower Sackville, NS.  In lieu of flowers, donations may be made to the Sisters of Charity Ministry Fund.