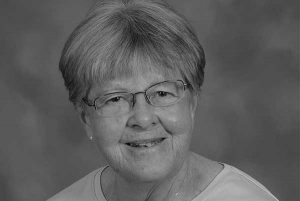 Eileen entered the Sisters of Charity – Halifax on September 8, 1960 and made her perpetual vows on August 15, 1968. Sister Eileen received a B.SC in Elementary Education in 1965 from Mt St. Vincent University and a MSC, Ed. from Brooklyn College in 1974. She began her teaching ministry in Brooklyn and later was asked to do formation work for the NY Province and then did Pastoral work on Long Island. After receiving a Masters Degree in Pastoral Studies (Counseling) at Loyola University in Chicago, Eileen worked in a parish in Tennessee and it was there that she co-founded a safe house for victims of domestic violence. In 1990 she returned to New York, and began her ministry with women, first in a shelter for abused women and then as a chaplain at the women’s jail on Rikers Island. Eileen received training in spiritual direction and for the past ten years has used these gifts to guide many people. Two years ago she began working with the Christian Life Community, an association of lay Christians who adopt an Ignatian model of spiritual life.

Eileen is survived by her brother Rob and her cousins Diane and Jean and their families who were so much a part of her life.