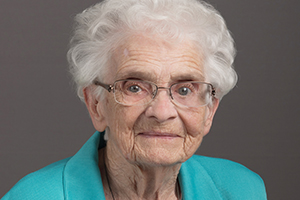 Age 95, died in Caritas Residence, Halifax, on August 9, 2022. Born in Halifax, she was a daughter of the late Joseph McGowan and Veda Agnes (McDonald). She entered the Sisters of Charity Halifax in 1949 and made her First Profession in 1952. Sister Catherine received her BSc in Home Economics from Mount St Vincent College in 1948. She taught Home Economics in New Waterford, and later at Mount Saint Vincent College from 1958-1965. Sister Catherine spent four years as the Dietician at the Halifax Infirmary. In 1968 Sister earned a master’s degree in nutrition and management from Cornell University, N.Y. In 1970 when the call went out from the congregation for the Sisters to go to Latin America, S Catherine volunteered and first went to Chiclayo, Peru for six months. From there she went to Bani, Dominican Republic where she would spend the next 40 years. Her work there began as outreach of the Halifax Infirmary at the Bani Public Hospital. As a dietician, Sister saw the need to work with mothers whose children were severely malnourished. S Catherine eventually became the on-site director of what became Centro Elizabeth Seton, a centre for women and children. Over the years her work flourished and eventually the Centro expanded to include a pre-school, a pharmacy, a dental center and to offer health and educational classes. In 2010 Sister Catherine retired and returned to Canada where she resided at Caritas Residence in Halifax. She continued to be involved with the Centro Board and stayed connected as the ‘Director Emeritus.” The Centre continues to thrive with the help of a foundation based in the United States, and with help from local residents and volunteers. Her legacy lives on. Although small in stature, Sister Catherine still stands tall in the eyes of so many, especially the people of Bani in the Dominican Republic. Her spirit was one of courage, hope, strength, hard work and love. She was always kind and so good natured, no one can remember ever seeing her mad or frustrated. Sister Catherine lived an extraordinary life of service and joyful witness to love. She had a true heart of charity and will be greatly missed by many near and far. Sister Catherine is predeceased by her parents; and stepmother, Elizabeth (Bessie) McCormack McGowan. She is survived by her stepsister, Annette McCormack of La Quinta, Calif., and her many cousins in Nova Scotia, Ontario and British Columbia. A Gathering for Prayer and Visitation will be held in JA Snow Funeral Home, Lacewood Drive from 2-4 p.m. on Tuesday, August 16th. Mass of Christian Burial will be celebrated at 10 a.m. on Wednesday August 17th, in Saint Agnes Church, Mumford Road. Burial to follow at the in Gate of Heaven Cemetery, Lower Sackville. In lieu of flowers, donations may be made to the Sisters of Charity Ministry Fund.