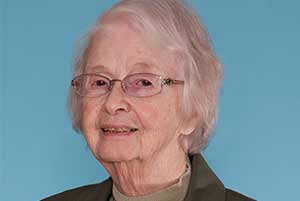 Age 97, died in Caritas Residence, Halifax, on December 27, 2020. She had been a resident there since 2008, and her family is deeply grateful for the tender care she received as she aged. Born in Windsor, she was a daughter of Walter and Rose Marie (Greene) Regan. She entered the Sisters of Charity-Halifax on September 8, 1942 and made her First Profession on April 1, 1945. She went on to live an exemplary life of selfless service, flavoured with a love of people, language, and family history. Sister Maureen began her teaching ministry in Brooklyn, N.Y., in 1945 as a primary teacher. She returned to Halifax in 1947, continuing to teach primary grades at St. Patrick’s for 11 years. Maureen earned her Bachelor of Arts degree in 1958 and her Masters in English Literature in 1967 at Mount Saint Vincent University. She taught in Quebec for four years, then returned to Nova Scotia teaching various grades in the Halifax and Dartmouth area until 1975. In 1981, she received her Certificate in Theological Studies from Loyola University in Chicago. After retiring from teaching, Sister Maureen was the Director of Novices in the Canadian Novitiate and later Director of the Renewal Center at Mount Saint Vincent Motherhouse, Halifax. Later, she worked part time at the Archives at Mount Saint Vincent. In 1988, Sister Maureen was elected to the Halifax Provincial Council of the Sisters of Charity, serving for four years. During those years, she was also a part time lecturer in children’s literature at Mount Saint Vincent University and taught in the Mount’s Literacy Program. It was also during this period of her life that she became associated with a group of refugees from Kosovo. She remained in contact with them until recently, and immensely enjoyed her role as surrogate grandmother. Sister Maureen had a true love for nature and the outdoors. She was an avid swimmer and enjoyed the many birds and deer who visited the grounds around the Mount. Her loving and generous spirit was appreciated by all who knew her. In addition to her parents, Sister Maureen was predeceased by her brothers, Walter, James and Gerald; sister, Greta. She is survived by her sister-in-law, Carole Regan; and her many nieces and nephews. A private vigil service will be held in Immaculate Conception Chapel in Caritas Residence on January 5, 2021. A Mass of Christian Burial will be celebrated on January 6th in Saint Agnes Church in Halifax followed by burial in Gate of Heaven Cemetery, Lower Sackville. The Funeral Mass will be a private gathering of family and Sisters of Charity Sisters and Associates. In lieu of flowers, donations can be made to the Sisters of Charity Ministry Fund.