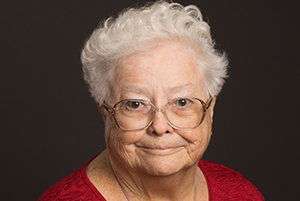 “Loved and energized by the One who called (her),” Sister Judith Rollo, with a great love of the congregation and its mission, heard the cry of the poor in all its variations. She was a “dynamo,” as one priest colleague defined her.

Sister Judith’s first mission was to Our Lady of the Cenacle, Richmond Hill, NY, where she taught on the junior high level, and later at St. Agnes High School, Rockville Center, NY. When she was assigned to Mount St. Agnes Academy in Hamilton, Bermuda, Judith’s long love affair with Bermuda began. Having received her B.Sc. degree from Mount St. Vincent University in 1970 and her M.Sc. degree from Bowling Green State University in 1973, Sister taught Mathematics and Sciences at Mount St. Agnes Academy, and served as Principal from 1980 to 2005. In that year, she was awarded the Queen’s Certificate and Badge of Honour for her service to Bermuda’s children.

As a teacher, she was committed to being “fair.” She admitted: “I try always to act fairly and to give others a second chance, maybe even a third or fourth chance.” She was devoted to her students and her push for excellence ranged from the science lab to the basketball court. In an article in The Royal Gazette, it was remarked, “It will be hard to imagine the start of a new school year without her.”

Later, Sister Judith was joined by Sister Dolores Sullivan who also taught at the Academy and together, in addition to regular teaching, they started the Woodmont Nursery for preschoolers. They also taught night English classes for Portuguese residents of the island. In retirement, Sister Judith and Dolores carried on a tremendous ministry to the sick and elderly – in hospital, in care facilities and in their homes. They regularly visited every care facility on the islands. They also hosted prayer services in their convent home and Sister Judith’s services were noted for their creativity and deep spirituality.

For over one hundred years, since 1890, the Sisters of Charity have ministered to the people of Bermuda and Sisters Judith and Dolores were the last to leave in 2021. They retired to Marillac Residence in the midst of the COVID-19 Pandemic, but Judith’s zeal and commitment to service were still evident as was her enthusiasm for the Red Sox. After witnessing a game in which the Red Sox won, Sister died suddenly but peacefully on July 27, 2021.

A Prayer Service for Sister Judith was held on August 2, 2021, at Mt. St. Vincent Chapel and was live streamed throughout the house. The Mass of Christian Burial was held at St. John the Evangelist Church Wellesley, MA. Sister was buried with her sisters in St. Mary Cemetery, Needham, MA.

Sister was predeceased by her parents and sister Susan (Cormican). She is survived by her sister Joan (Smith) and brother William.