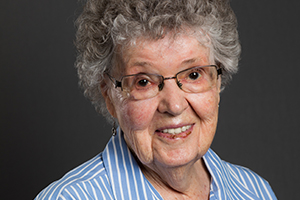 Meeks, Sister Joan, (Sister Joan Stephen) beloved Sister of Charity, Halifax for 73 years, entered peacefully into eternal life on Tuesday, August 16, 2022. She was the devoted daughter of the late John A. Meeks and Ethel McDonough Meeks of Brooklyn, NY. Sister Joan was also predeceased by her older sister, Mary DeWolfe. She leaves her loving sisters in the congregation and nieces, Joan Marie Doherty, Paricia Rescigno and her husband Rob, Mary Beth Rucker and her husband Dan and nephews, Stephen deWolfe and his wife, Luann, Paul deWolfe and wife, Traci, Christopher deWolfe and his late wife Debbie, John DeWolfe and James deWolfe as well as sixteen grandnieces and nephews and twenty-five great-grand nieces and nephews. Sister Joan entered the Sisters of Charity, Halifax in 1949 and began her ministry as a teacher at Saint Patrick School in Quebec. Sister Joan was then missioned to Boston where she taught at Saint Kevin School and Saint Peter School, Dorchester, MA and Saint Michael School, North Andover, MA for almost fifteen years. In 1967, Sister Joan returned to her native New York to teach at Resurrection-Ascension School and Maria Regina High School in Uniondale, NY. She then was missioned to Saint Barnabas School in Bellmore, where she served as Principal. Toward the end of her educational career, Sister Joan accepted a position as a Residential Counselor at Boys Hope International in Cincinnati, Ohio, where she worked with adolescent boys in need of support and direction. Following this, she returned to New York to serve in the New York Childhood Center at Saint Brendan School in Brooklyn as an Educational Assistant. Her last teaching assignment was at Saint Nicholas of Tolentine School in Jamaica, NY before retiring to Marillac Residence at Mount Saint Vincent in Wellesley in 2012. Wake will be held on Friday, August 26, 2022 at 10:00 AM with Mass of Christian Burial following at 11:00 AM in Saint John the Evangelist Church, Wellesley, MA. Interment will take place following at Saint Mary Cemetery, Needham, MA. In lieu of flowers, donations in memory of Sister Joan Meeks, SC may be made to the Sisters of Charity, 125 Oakland Street, Wellesley, MA 02481.