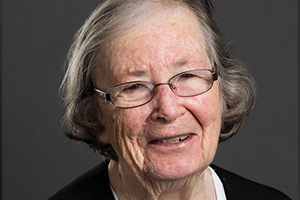 McGovern, Sister Anne (Sister Hugh Francis), beloved Sister of Charity, Halifax for 73 years, entered peacefully into eternal life on Saturday, August 20, 2022. Devoted daughter of the late Hugh and Rita. She was also predeceased by her brothers, Hugh, and Fr. Joseph McGovern and her sisters Patricia, Rita, Carolyn, and Regina. She leaves her loving sisters, Rose and Margaret and her brother, John. She also leaves many devoted nieces, nephews, and grand nieces and nephews as well as her sisters in the congregation. Sister Anne entered the Sisters of Charity, Halifax in 1948 and was missioned to Saint Peter School in Dorchester, MA where she began her ministry as an elementary school teacher. Following this assignment she served at Saint Pius Memorial School in Halifax, Saint Mary School in Port Hawkesbury, and Saint Catherine School in Halifax, Nova Scotia, coming back to Saint Peter School, Dorchester in 1967. Sister Anne returned to native New York in 1972 to teach at Saint Barnabas School, Bellmore, Our Lady of the Cenacle School, Richmond Hill where she served for several years and continued on as a substitute teacher there and at Saint Nicholas of Tolentine School, Jamaica into her retirement years. Sister Anne’s ministry was not confined to the classroom. She found herself involved in many parish activities wherever she was missioned—Religious Education, Sodality, adult and children’s choir, training Alter Servers, Sisters of Charity Auxiliary and as an Extraordinary Minister of the Eucharist. She never tired of making God’s love visible wherever she was. Sister Anne moved to Marillac Residence in Wellesley, MA in 2019. Mass of Christian Burial will be celebrated on Monday, August 29, 2022 at 11:00 AM in Saint John the Evangelist Church, Wellesley, MA with a wake beginning at 10:00 AM at the church. Interment will take place following the Mass at Saint Mary Cemetery, Needham, MA. In lieu of flowers, donations in memory of Sister Anne McGovern may be directed to the Sisters of Charity, 125 Oakland Street, Wellesley, MA 02481.