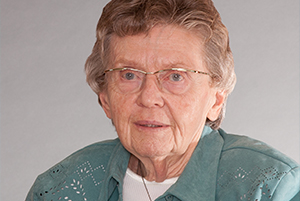 Fleming, Sister Anne (Sister Michael Mary), 87, died at the Victoria General Hospital, Halifax, NS on November 23, 2018.  Born in Dorchester, Massachusetts, on July 3, 1931, she was a daughter of Michael and Mary (Whooley) Fleming.  Sister Anne entered the Sisters of Charity–Halifax on September 8, 1948 and made her profession on August 15, 1957.  She is an alumna of Mount Saint Vincent University, Halifax and Boston University, Massachusetts. Sister Anne taught school in Woodside, New York, and St. Joseph-A. McKay, Halifax.  She worked as Pastoral Assistant at St. John Vianney, Lower Sackville.  Sister Anne was Provincial Superior, Halifax from 1980-1988.  She was active in the parishes of St. Ignatius, Bedford and Saint Mother Theresa, Halifax. Sister is survived by her sister Eileen Sameski and brother Paul Fleming, as well as several nieces and nephews. She was predeceased by her parents, her sister Mary, OSF, and brother Leo. Visitation will be at Caritas Residence on Wednesday, November 28, from 3pm until the Prayer Service at 7pm.  A Mass of Christian Burial will be celebrated on November 29, at 10 am in the Immaculate Conception Chapel in Caritas Residence.  Burial will follow in Gate of Heaven Cemetery, Lower Sackville, N.S. In lieu of flowers, donations may be made to the Sisters of Charity Ministry Fund.