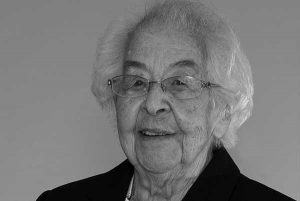 Nearing, Sister Florence Patrice, died in Caritas Residence in Halifax, NS on February 17, 2017, one week shy of her 101st birthday. Born in Dominion, Cape Breton on February 24, 1916, she was a daughter of Patrick J. and Flora (McMullin) Nearing. Sister Florence Patrice entered the Sisters of Charity – Halifax on August 15, 1934 and made her perpetual profession on August 15, 1943. She received a BA from Mount Saint Vincent College, Halifax, NS in 1957 and an MA in English from St. Francis Xavier University, Antigonish, NS in 1966. Sister began her ministry in education in 1937 and served in various capacities as teacher and principal. This ministry took her to such places as Glace Bay, New Aberdeen, Port Hawkesbury, Dartmouth, Eastern Passage and New Waterford, all in Nova Scotia and to Arvida in Quebec. Sister continued in this ministry for forty years until her retirement in 1977. After retiring from teaching, she attended the Credo Program given at Gonzaga University, in Spokane, Washington where she studied for a year. In 1978, she began volunteer service at Breton Education Centre and served as a home visitor to troubled families. She also coordinated the Genesis II program. In 1985, she retired to Mount Saint Vincent Motherhouse in Halifax where she continued her volunteer activity. Sister is survived by her sister, Rose (Paul) Brown, (Mayo, Quebec); and by her brother, Francis (Patricia) Nearing, (Eugene, Oregon, USA); as well as many nieces and nephews. She was predeceased by her brothers – Rev. Joseph Nearing, Rev. Peter Nearing, Rev. Charles Nearing, Pius (Eileen Burns), Roderick, Ignatius, Bernard and Patrick; and by her sisters – Sister Monica Nearing, SC, Sister Catherine Nearing, CSM, Margaret (Tom) MacEachern, Theresa (John) McKenna, and Monica II. The body will be in Caritas Residence on Tuesday, February 21, with visitation from 3 pm until the Prayer Service at 7 pm. A Mass of Christian Burial will be celebrated on Wednesday, February 22, at 10 am in the Immaculate Conception Chapel in Caritas Residence. Burial will follow in Gate of Heaven Cemetery, Lower Sackville, NS. In lieu of flowers, donations may be made to the Sisters of Charity Ministry Fund.