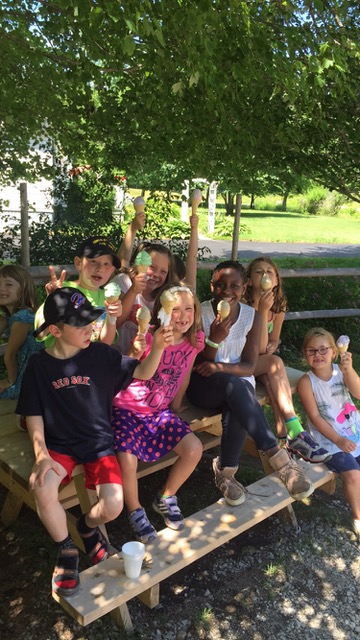 The Ward 5 Neighbourhood Centre and the Volunteer Doula Program, both in Halifax, NS, have benefi tted from the Congregation’s Ministry Fund grants, thanks to S. Joan O’Keefe’s involvement. Ward 5 Neighborhood Centre had an extremely busy summer with day camps for children who participated in outings to Victoria Park in Truro, Shubie Park, Oaklawn Farm Zoo, on a boat tour, and almost daily beach trips. Other activities included crafts, cooking, playgrounds and lots of fun. The 35th Annual Block Party saw hundreds come out to enjoy a barbecue, bouncy castle and games. The fall programs are filled to capacity for breakfast, lunch and after school.  Senior programs are ongoing, as well as a food bank.

The Volunteer Doula Program operates out of the Chebucto Family Centre.   In a recent 6-month period, the program supported 67 families.  Of those, 17 were newcomers to Canada, the majority being from Syria. That meant that interpretation needs spiked drastically, so staff  are exploring ways to continue serving mothers who do not speak English or French.

The Volunteer Doula Program celebrated its 20th Anniversary last summer, and the Congregation was heartily thanked for its financial support during all of the years of the program.  S. Joan O’Keefe was Co-ordinator of the Chebucto Family Centre (formerly Single Parent Centre) for 13 years, and has been a volunteer doula since 2008.

The problem which divides people today is not a political problem, it is a social one. It is a matter of knowing who will get the upper hand, the spirit of selﬁshness or the spirit of sacriﬁce…
–Frederick Ozanam, Founder of the Society of St. Vincent de Paul

Kelowna, BC is a lovely small city to live in. It is nestled on the banks of Okanagan Lake which is approximately 90 kms long and surrounded by a gentle mountain range.  As you drive though the city, you will see orchards and vineyards in unexpected places. Kelowna has considerable wealth, partly due to retirees who have come from other parts of the country. The average age is 10 years older than the national average. Like most cities in North America, it has another side – a side very well hidden in Kelowna – and that is the presence of the poor. You can drive down Leon Street, and the poor are very visible. It is the home of the Gospel Mission and Native Friendship Centre. Alcohol and drugs are bought and sold here. There are organizations that reach out to help, but the constant fl ux in this population makes the outreach difficult.

There is a more hidden problem that has become apparent to the fi ve conferences of Saint Vincent de Paul Society in Kelowna. We’ve discovered that most of our clients are living in unsafe or unhealthy housing with little hope of moving on unless a subsidized housing home becomes available, and that can take two or three years. In an attempt to address this need, the Invincible Housing Program has been established. It provides modest rent subsidies and support for families in situations that cause serious hardship. Rent is usually 60% percent of these people’s income, which is often a disability cheque of less than $1,000/month. The program began this year as a pilot project, and our Congregation provided a grant. We laid out what we thought was a working model: we would subsidize individuals or families up to $200 per month for a year, after which the clients would take over the full rent. During that year, we would help them with life skills and a course called How to Become Better Renters. We thought we had a very good outline of desired goals and outcomes. However, reality has challenged the program. For example, almost all of these clients have mental health problems and will never be able to work enough to take on the added expense for rent. Their only hope is subsidized housing. Let me tell you about some of the people with whom I have been engaged. I am changing their names out of respect. Two of us from Saint Vincent de Paul began to work with Mary last March. She was living in 200 sq. ft. and paying $600 rent out of her total monthly income of $900. All of her furniture except the bed was on a leaky covered deck. Interestingly, she told us that when she had been a drug addict and alcoholic, there was all kinds of help available but now that she is clean, there is nothing for her. Our role was to put her into contact with persons who could address her mental health issues. We thought she was making progress, but our hopes were continually dashed; she seemed unable to move ahead. But it turns out, Mary was making so much progress that when we finally told her we would help her with her rent, she replied, “it’s okay, someone else probably needs it more than me.

Because I now have a job at the Gospel Mission where I used to go when I lived on the streets.”  Our notion of success was certainly not hers – all she really needed was someone to care for her. She’ll be okay now, until something opens up for her in subsidized housing. Then there was Tom, whose disability payment was stalled and he was $400 short on his rent every month. He had been living in the same apartment for 20 years but had become unemployed due to sickness. His need was well above what we had envisioned for a subsidy, but he would never be able to relocate. We advocated to have his disability funding addressed more quickly. Until that happens, we will help him out with his rent. I hope this gives you some idea of how
our Ministry Fund grant is being used.

The committee that oversees our housing program thanks the Sisters of Charity, who were there first to contribute.

The Merrimack Valley Immigrant and Education Center (formerly the Asian Center) was founded almost 30 years ago by Sisters Helen O’Leary and Barbara Sullivan. Their mission was to address the basic needs of the Asian immigrants and refugees in the Greater Lawrence area, one of the poorest cities in the state of Massachusetts. Later, through the guidance and leadership of S. Elana Killilea, our client base evolved into a mini-United Nations. Today, S. Anne Hegarty serves on our Board of Directors, helping guide us in our mission. Our name change refl ects the change in our clients’ demographics. Today, our clients are 65% Latino (coming from the Dominican Republic, Puerto Rico, Guatemala, Venezuela, Peru and Brazil). The other 35% come from Cambodia, China, Korea, Thailand, the Philippines, Ukraine, Somalia and the Democratic Republic of the Congo.

This year, our programs will serve more than 500 immigrants – 75% women – ranging from 12 to 85 years old. Over 90% of our participants have moderately low to extremely low income levels. MVIEC is a unique organization with a long history of providing services and programs for every generation in our community. Our mission is achieved through human service programs for elders. We also run classes for adults in citizenship, English as a Second Language, financial literacy and English for employment. We provide youth writing workshops. In conjunction with our classes and programs, we also help clients with assimilation and immigration concerns. One of our recent success stories is a Vietnamese woman who immigrated to the US with her young daughter. She came to our Center to learn English and then to prepare for US citizenship. She worked hard as a nail technician, supporting herself and her daughter. For more than five years, our staff helped her petition for her husband to join her here and just recently, he was able to immigrate. They have new hope and promise for a better future here, together. This is just one of the many positive influences we have had in the lives of our students/clients. With continued support from the Sisters of Charity, we will continue to give our clients the tools they need to be positive contributors to the community.

Recently, I was asked to write about how I spend my Ministry Fund grant.  I went over my expenditures for 2015-16.  I have used most of the money for the in-house printing of my last three books, written for newcomers who are trying to improve their English.  I send copies of my books to ISANS (the Immigrant Settlement Association of Nova Scotia), to the Sisters at Wellesley for their staff  English instruction program, to the ESL tutors in my parish (St. Benedict’s, in Halifax, NS), and to one of our Sisters in Halifax who also tutors refugees.  They report that they find the books helpful. Titles of my recent books are  Let’s Talk, Pictures Tell Stories and Conversation Bits.  I include pictures from old magazines and write a conversation between two people in the picture.  I really enjoy writing them.

In my parish, nine volunteer tutors help individuals or small groups with English, weekly. We help immigrants and refugees from about 20 diff erent countries. It is so interesting to learn about the way of life in their countries and why they chose Canada. Last year, Canada welcomed 25,000 Syrian refugees, and many came to Halifax. I taught Maria for about eight months, until she got into a new program. At present, one of our Associates, Diane Walker – an expert in teaching ESL – and I are helping Mohammad (the student’s name has been changed). Mohammad owned a large restaurant in Syria, and was ready to open a second one. His restaurant was bombed and he lost everything. When an apartment building near their home was also bombed, Mohammad, his wife and four children fl ed to Lebanon. They came to Halifax last January. Now I have started a very simple book for Mohammad. I admire his patience as, at the age of 56, he struggles with the very basics of English. Two days ago, he called a friend in Syria. The militia were in his friend’s apartment. They were going to kidnap his friend, if he did not give them $150,000. How could he raise that amount? Mohammad realizes that although he does not yet have a job, he is safe, welcome and cared for financially, by a local Catholic parish, for a year. He goes to school at night. Diane and I teach Mohammad at Caritas Residence. He is welcomed by our Sisters and our kind staff. Such a gracious, kind man. It is a privilege to help him get settled in our city. Another stranger is becoming a friend.