I Had No Idea 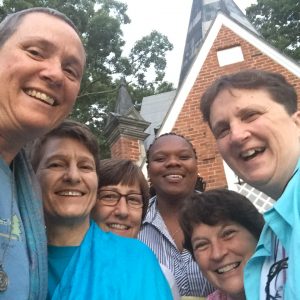 Sister Maryanne Ruzzo, right, during a Sisters of Charity Federation gathering at the Shrine of Saint Elizabeth Ann Seton in Emmitsburg, MD.

This year the Sisters of Charity, Halifax along with 13 other congregations in the Sister of Charity Federation and the Vincentian priests, the Ladies of Charity and the Vincent de Paul Society celebrate the 400th anniversary of what we call the Vincentian Charism or Spirit. As a Sister of Charity it is exciting to be connected to a spirit that began with Saint Vincent de Paul and Saint Louise de Marillac so long ago and continues to live on. But did I really understand how exciting this charism could be when I professed my first vows 25 years ago? I had no idea!

When I think back to High School, I remember a verse from a song sung by Sister Maureen and written by one of our sisters. The words actually came from Isaiah 61. “ The spirit of the Yahweh has come to me. He has anointed his holy one – to bind broken hearts, to set captives free, to bring good news to all the poor, to proclaim their liberty”. This song touched my heart and I can still feel that moment. Later I learned that Jesus used this scripture passage as he was beginning his active ministry and that it also was a passage that was central to the Vincentian Charism. I had no idea that God was calling!

Twenty-five plus years later I can’t imagine my vocation being anything other than being a Sister of Charity. Not to say that there weren’t times when I have seriously questioned my call. There have been. Should I have gotten married instead? had Children? stayed single? In recent years I’ve wondered if there is still a purpose anymore when religious congregations in North America are aging and people wonder if we even still exist? Well, I’ve discovered that I am right where I am supposed to be and that God is still calling women and men in the Vincentian tradition. I had no idea I could doubt and still be faithful!

Vincent came to know God especially through the face of those who live in poverty. He felt called to right in great ways or small the injustices he saw around him and he knew that he needed to build relationships with many so that this could happen. The Charity of Christ urged Vincent, it urges the Sisters of Charity, it urges me to continue this mission. Somewhere in my deepest being I feel called to want to share the love of God with those I meet. The surprise has been that in living this call, I have been blessed to get to know the love of God through women who were homeless, through children with special needs, through patients who struggled with illness, through those who suffer from addiction and mental illness, through women who have been trafficked, through young people who desire to serve, through working with those who desire to change the systems, through those who are elderly, through my co-workers, through caring for all of creation. I could go on. But, I had no idea that, as I served God, others would actually teach me about the love of God!

I give thanks for the call to give joyful witness to the love of God and to learn from and be with and among those who live in poverty and care for our earth. I look forward with anticipation to where God is leading me, the Sisters of Charity, and the Vincentian family for the next 400 years! I trust but I have no idea! I just know that the Charity of Christ urges us on!

Sister Maryanne Ruzzo attended the Vincentian Family Gathering in San Antonio, TX this year. Here is a bit of her experience.