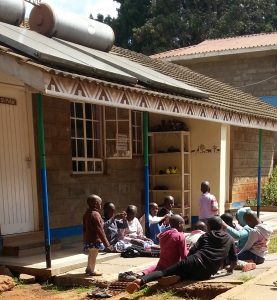 Editor’s note: A year ago, Sister Jolaine went to Kenya to provide counselling services to children who have been orphaned by HIV/AIDS . Nyumbani (a Kiswahili word meaning home) is the orphanage and community outreach program of the Children of God Relief Institute. S. Jolaine was in Halifax, NS for a number of months but returned to Nyumbani in late August.

Some time has passed since my return to Nyumbani. I was greeted much as a returning family member after an extended absence. For my part, I felt and feel at home. The day I arrived, it was warm and sunny, much as I remembered; however, the next day and for two weeks thereafter, it was overcast, cold and sometimes raining. I wore wool socks (thanks, Sister Joan B!) and a fleece jacket. I felt chilled most of the time. Then the sun returned and with it, the warmth.

In September, Nyumbani celebrated the 24th Anniversary of its founding (Sept. 8, 1992). The children and staff from Nyumbani Home, Lea Toto and Nyumbani Village entertained the family community and guests with traditional dancing and singing. The celebration culminated with a sumptuous meal. Next year, the Silver Anniversary promises to be an even greater celebration.

Given the preliminary work I did when I came to Nyumbani last year, I have been able to begin my ministry in a more timely fashion. I see several children for individual counselling and I am supervising a student earning her Master’s degree in Counselling, who is assessing and counselling a few of our preschoolers.

I’ve started drafting a proposal for a psycho-social program to address developmental and emotional/psychological needs of the Nyumbani children. It must pass through many steps before it’s implemented.