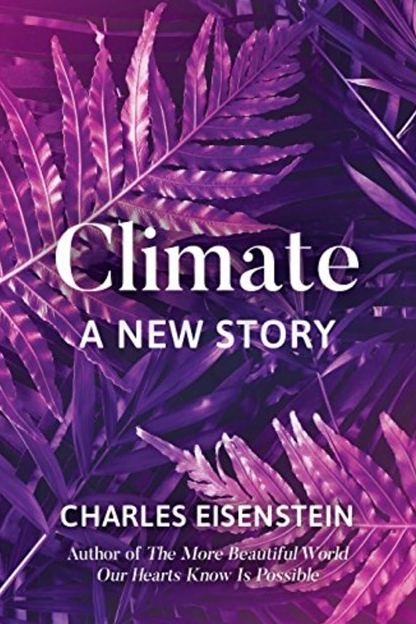 Charles starts this book with a dedication which I think sums up his consistent and main message.  It is also why I like what he says so much:

To the humble people, whose quiet service holds the world together.

His purpose in writing this book is that much of climate talk is referring to symptoms instead of causes which comes from a particular framing or worldview.  For example, the focus is too narrow as it addresses our addiction to fossil fuels.  He reminds us of what we know and that is, any addiction is a response to unmet needs such as a basic desire for connection, community, beauty, sacredness and intimacy.  The source for “ecological degradation” comes from a mythology that sees a separate self in a world of others (“they”).  That Story of Separation underlies money, law, medicine, science, technology, education and so on.  The shift needed (more than cognitive) is described by Eisenstein as one to a Story of Interbeing (a word that comes from Thicht Naht Hanh) which says that existence is relational.  When one does make the shift, everything changes.

This presentation states that what is necessary to restore the ecosystem is an internal as well as external project of love and empathy.  Love and empathy are irrational so it puts the mind in conflict with the heart and therefore the truth.

So what are practical actions?  First, to recognize that the world story is based almost exclusively on force and control which only results in despair (unacknowledged grief).  It requires endless war; we’re always fighting something which in turn requires fear tactics and has only short term ineffective results.  Rather, “Climate change calls us to a greater transformation than a mere change in our enemy sources.  It calls us to transform the fundamental relationship between self and other, including but not limited to the relation between the collective self of humanity and its ‘other nature.’”

Second,  to recognize that nature is not a “thing.”  Interbeing refers to what is beyond inter-connectedness or inter-dependency…” my very being partakes in your being, and in the being of the wholes.”

As is clear from what I’ve summarized so far, Eisenstein is addressing us just where we’re at as Sisters of Charity in this moment.

The book is substantial but I recommend it because I think we are ready to understand what he is saying.  Most of the pages consist of the author laying out just what an ecosystem is and then describing all the ways, large and small, that contributions can be made to Earth’s healing and regeneration. All of the policies and practices he’s described are within reach right now and just requires dedication and a trust of our knowledge that a healed world, a more beautiful world is truly possible.  The detail in this text leaves no doubt about Eisenstein’s competence in science but his last chapters are called “An Affair of the Heart” and “A Bridge to a Living World.” He offers much to ground our ongoing discussions.