Book Review – Ministry for the Future 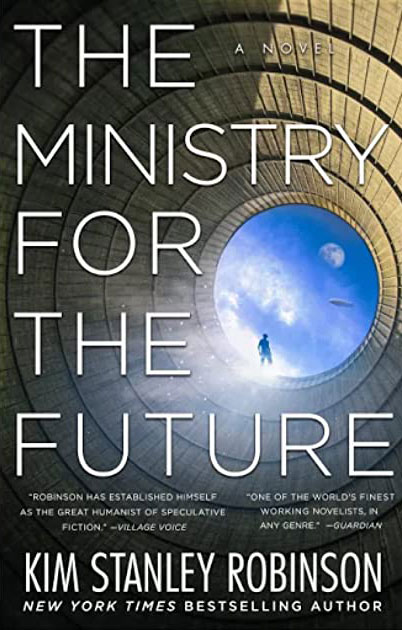 Ministry for the Future:  A Novel, by Kim Stanley Robinson

A Plausible Glimpse Into the Future:

Don’t miss the subtitle of this book.  It is a novel, and “ministry” is used as a government term for a department of expertise.  The fictional Ministry of the Future is established in 2025 based on an article of the Paris Climate Agreement [PCA] to “advocate for the world’s future generation of citizens…”  Backed by the UN and the signatories of the PCA it has considerable power to influence world governments. It is a kind of prestigious think tank, with experts in law, glaciology, economics, oceanography, geo-engineering, agriculture, refugees, indigenous peoples, and infrastructure.

As hinted in the list above, the Ministry is broad in its reach.  It’s mostly short 106 chapters touch on all of the above, with the experts making brief appearances to describe the global work they are doing in their field.  Threaded through the book are short philosophical essays on economy, ideology, the meaning [or lack or meaning] of money, and a carbon currency that pays nations not to burn fossil fuels.  But the plot has just two main characters who accompany the reader for several decades into the future. One is Mary Murphy, an Irish woman who directs the Ministry.  Her expertise is leadership and a deep, intuitive grasp of human behavior.  The other is Frank May, an “every human” who bears in his body and spirit the effects of a tragic climate event.  Against all odds, they become friends, each challenging the other to value what is best about the human being, an especially complex animal whose future depends on respecting other animals and the unique planet that supports them. The description of Mary and Frank’s work, as well as their inner struggles is the context that moves readers to care about all the information the book slings at them.  And it must be added that Robinson’s witty and compassionate touch helps a lot, as in this reflection from Frank on post-traumatic stress disorder.  “What was the trauma, what was the stress, what was the disorder? No one knew. In the jungle of each mind, a wandering went on ceaselessly, finding a clearing here, a pool there, all in the murky light of one’s sputtering thoughts, half awake, half asleep. … helpers tried to put words to it… But sometimes it didn’t work.”

The Ministry of the Future has its main office in Zurich, Switzerland where both Mary and Frank live.  An extra treat is the imaginative trip one makes to that country, as the lakes, mountains and people are described along the way.  A foray or two into Antarctica is also vividly rendered.  So much speculation about the inexorable press of climate change, threat of extinction, the herculean efforts to forestall it!  How does it end? Author Kim Stanley Robinson is a gifted artist, not a prophet. However, it can be confidently stated that readers who persevere to the end [of the book, that is] will not be disappointed.